Flower Beard meme + Why do historical paintings have so many squirrels in them?

Flower Beard meme + Why do historical paintings have so many squirrels in them? 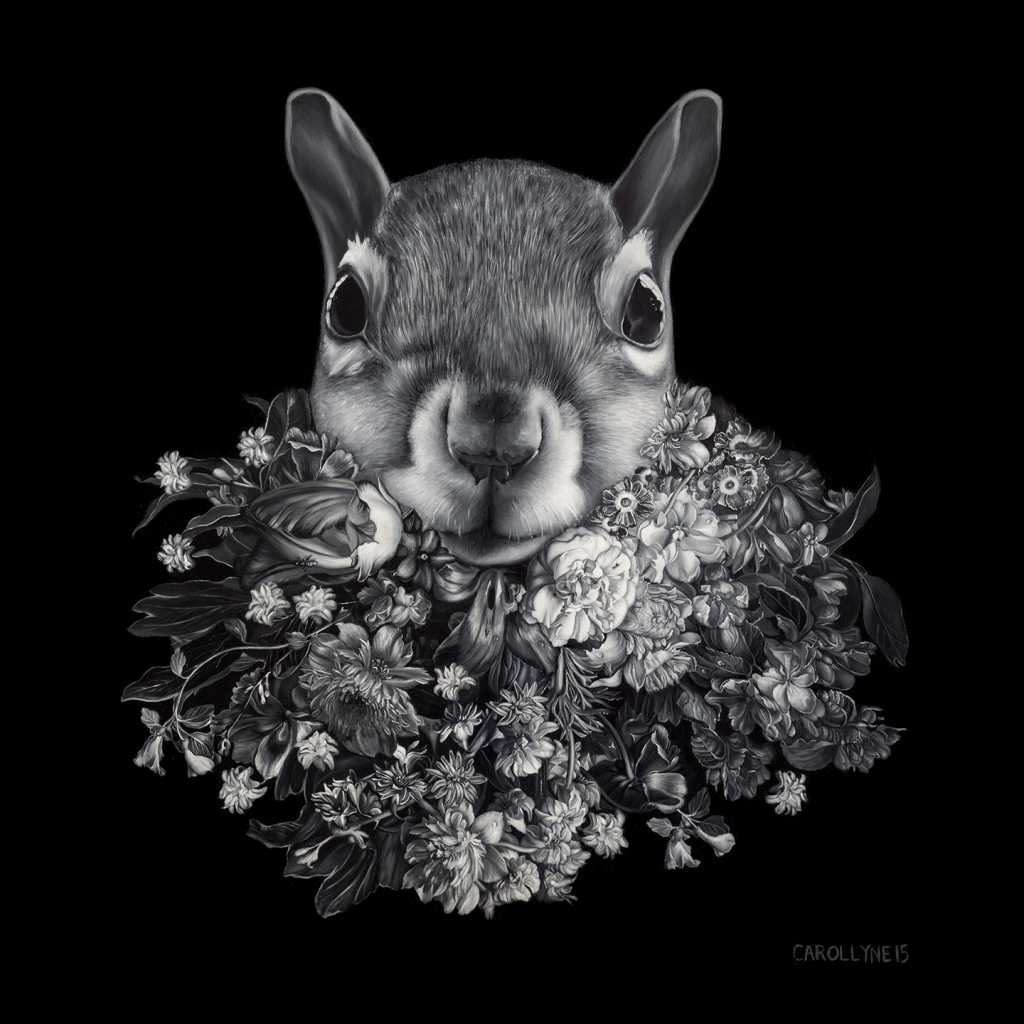 Flower Beard painting was conceived of two primary ideas. The Flower Beard meme of 2014, a contemporary cultural element that was spread primarily though digital images and social media (Tumblr, Facebook, and Instagram), and my fascination with squirrels featured in historical paintings and manuscripts dating back centuries. 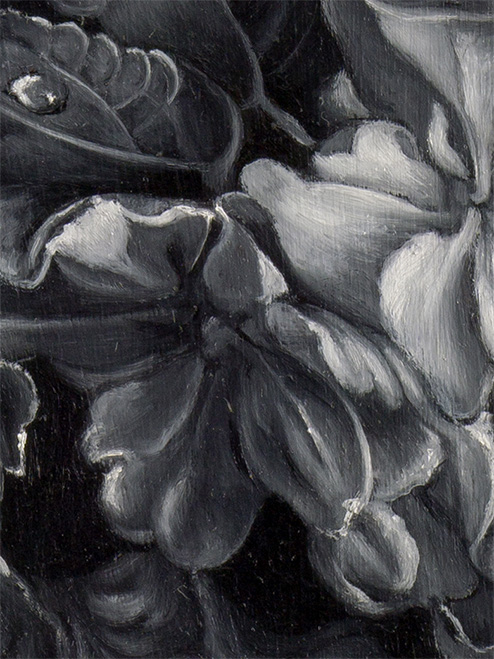 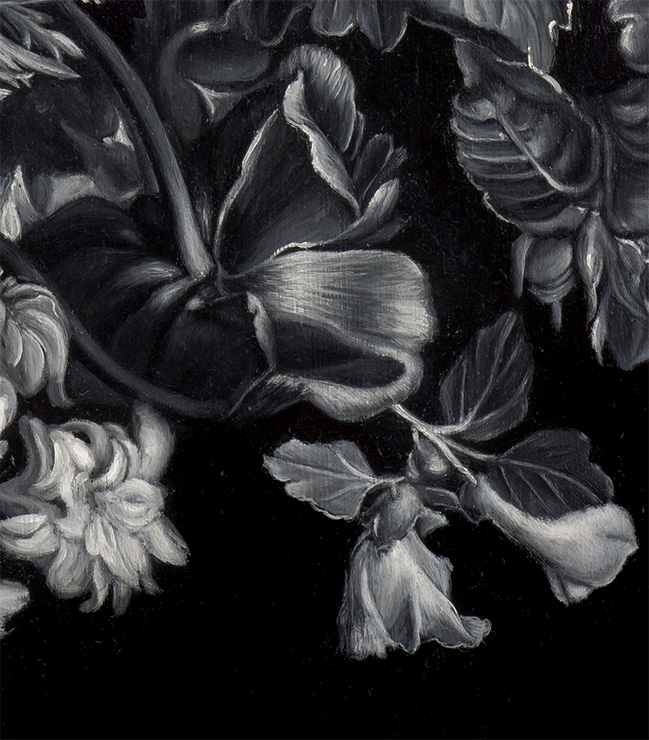 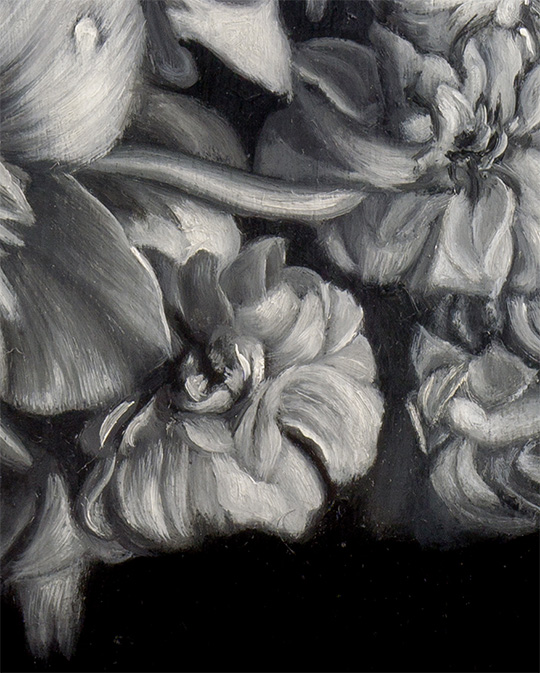 First let’s look at squirrels depicted throughout history in art and paintings.  Amusingly enough, the question of why squirrels have been so prevalent in the history of art has bemused art lovers for years, as shown below in this comment card recovered from the New York Public library’s archive is being published online, revealing the many roles the librarian was expected to play in the days before the web.
http://www.theguardian.com/books/2015/may/28/librarian-new-york-public-librarys-quirkiest-enquiries 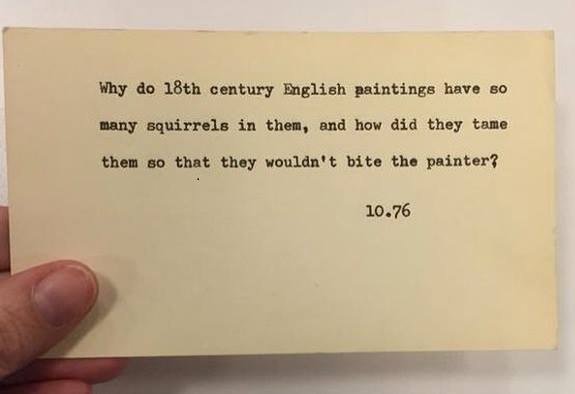 Why do 18th century English paintings have so many squirrels in them, and how did they tame them so that they wouldn’t bite the painter?’ 10/76 Photograph: NYPL

At least one answer is easy to find. Squirrels were kept as pets in the Middle Ages and Renaissance, as Kathleen Walker-Meikle notes in Medieval Pets: Even if it came from a species that had little intrinsic monetary value, an animal could be transformed into a pampered pet of exalted status by adorning it with elaborate accessories. Such is the case of the squirrel, a popular medieval pet, which is almost always described and depicted as being fitted with a collar and chain, usually finely crafted in silver … the practice of keeping pet squirrels on chains still prevailed in the sixteenth century, as observed in a dialogue in John Lyly’s play Endymion:

Tophas: What is that the gentlewoman carrieth in a chain?
Epiton: Why, it is squirrel.
Tophas: A squirrel? O gods, what things are made for money! 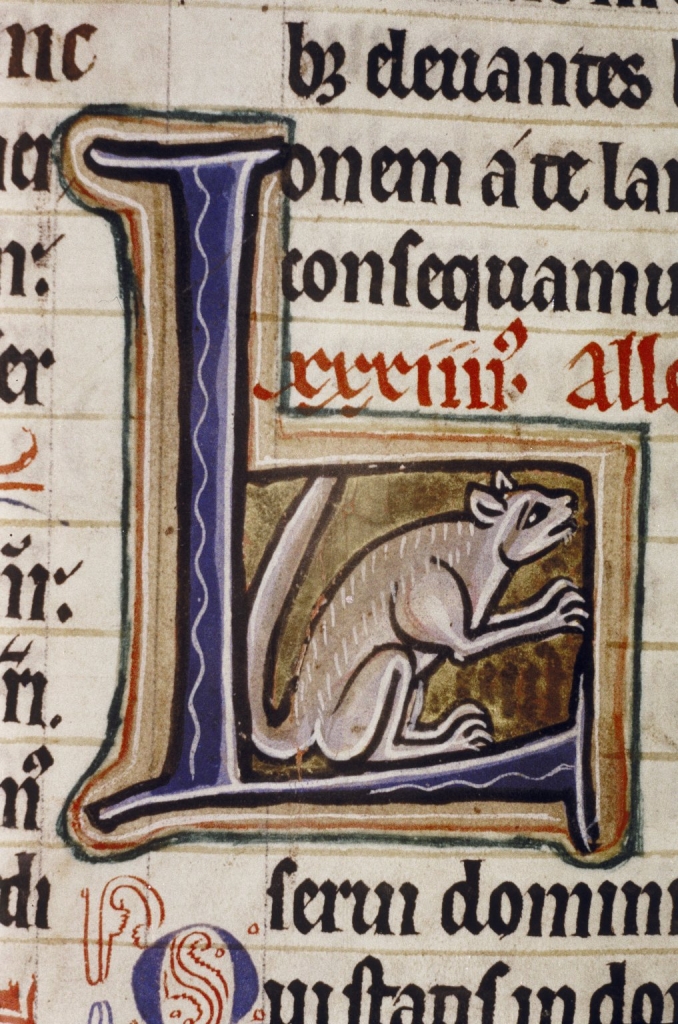 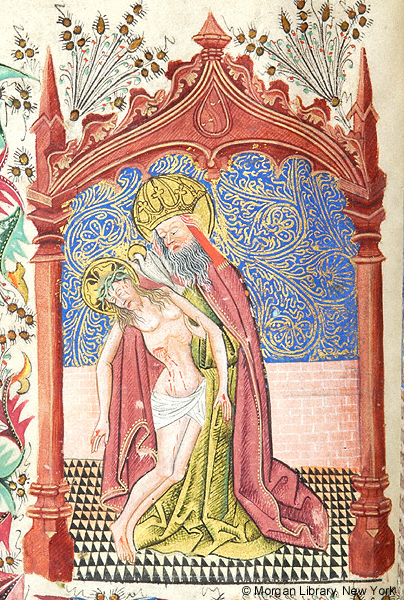 rinity: God, Man of Sorrows and Dove — God, nimbed, wearing imperial crown, stands, holding with draped right hand and with left hand, sagging body of Christ, crossed nimbus, with crown of thorns, wearing short loincloth, bleeding from wounds. Dove of Holy Ghost, nimbed, hovers between them.
Margins decorated with border of foliate ornament and bunches of twigs, and inhabited by squirrel, wearing collar with lead attached to ring on block on which the squirrel is seated, and by fantastic bird. 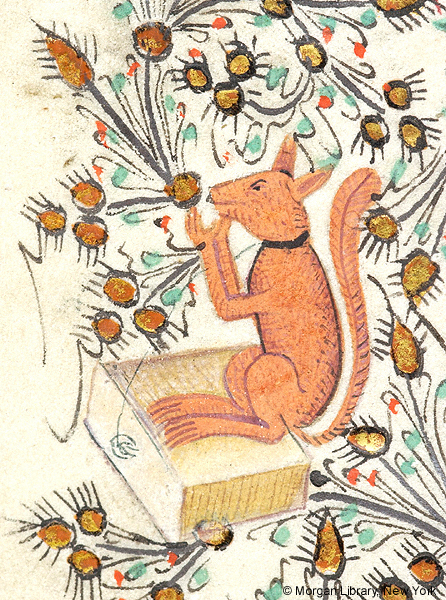 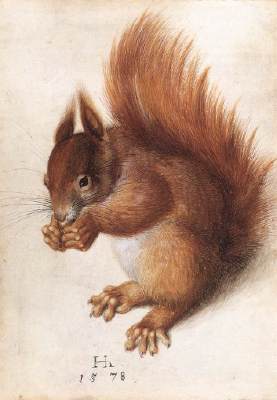 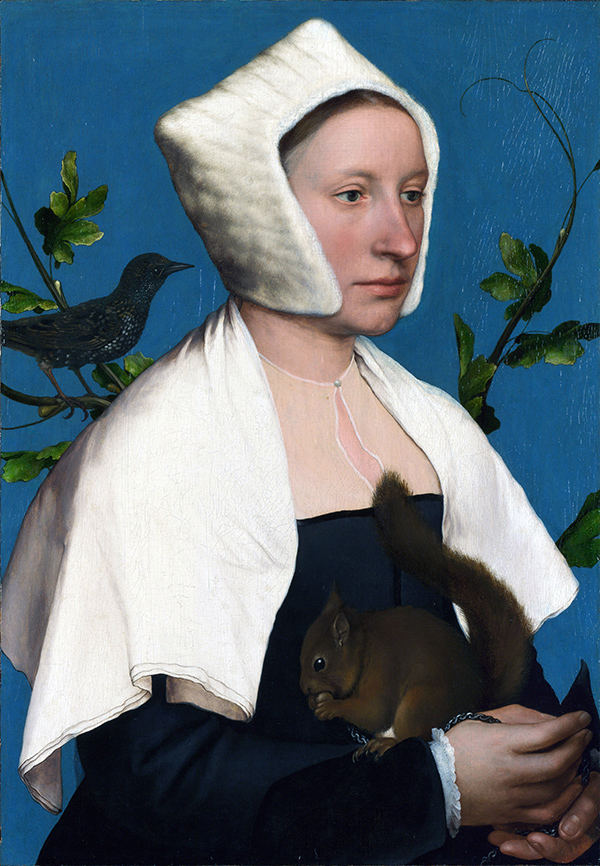 A Lady with a Squirrel and a Starling (Anne Lovell?)
about 1526-8, Hans Holbein the Younger

Squirrel is also a symbol of hard work it took to grow this abundance. Read more. 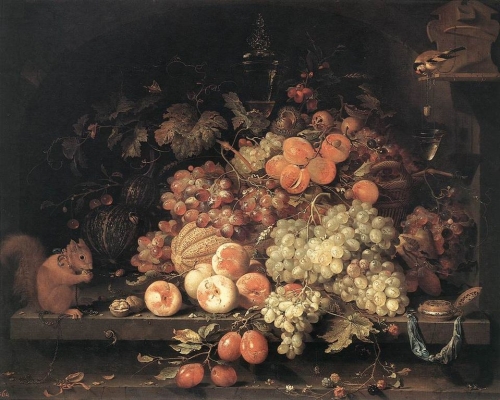 Abraham Mignon (1640–1679). Fruit Still-Life with Squirrel and Goldfinch
Date: second half of 17th century. oil on canvas.
Museumslandschaft of Hesse in Kassel 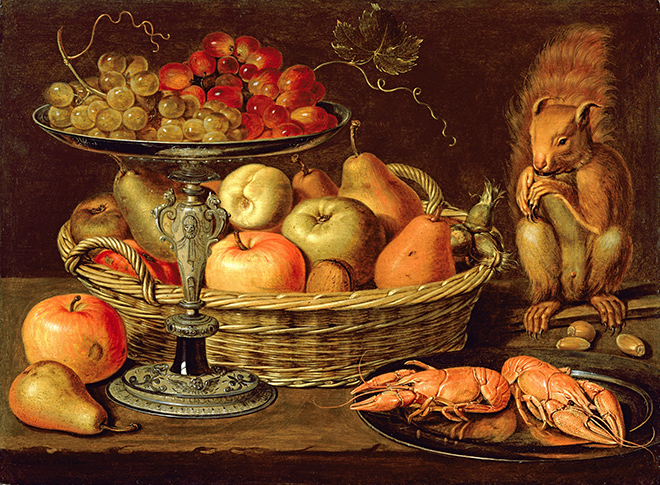 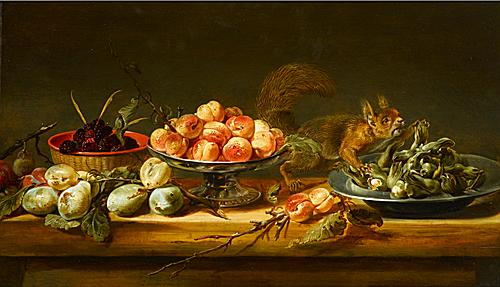 Flower Beards is a men’s fashion trend that involves decorating one’s facial hair with floral arrangements. In contrast to the flower crowns for men which evolved into a photoshop meme in 2013, the flower beards are actually worn by men and shared online in the form of a photo fad.

The earliest known flower beard photo was taken of Soup.io user erial’s father in 1977 (shown below). 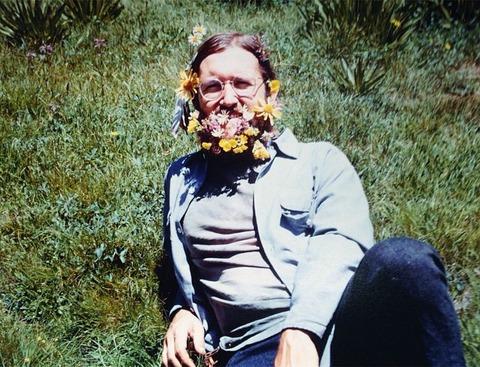 I first became aware of the photo / fashion fad through a CBC News social media post on July 21, 2014. And again later that year around the holiday season. 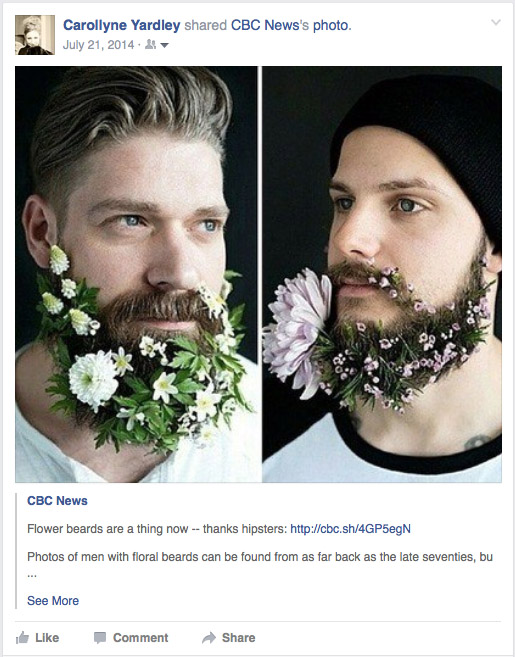 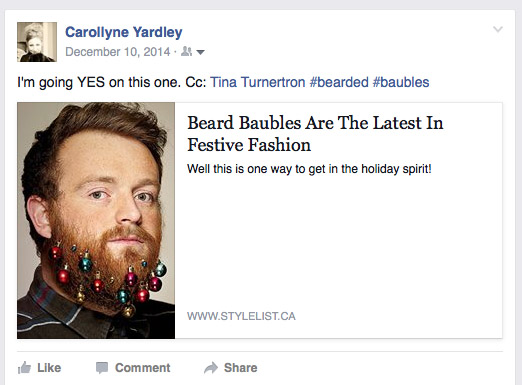 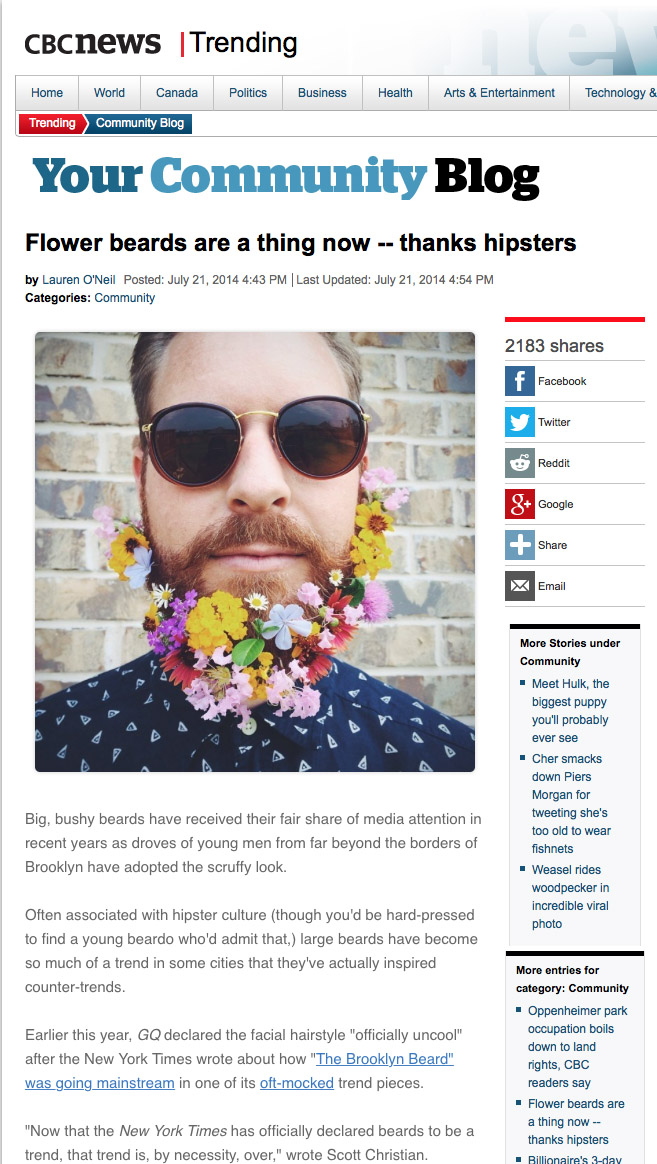 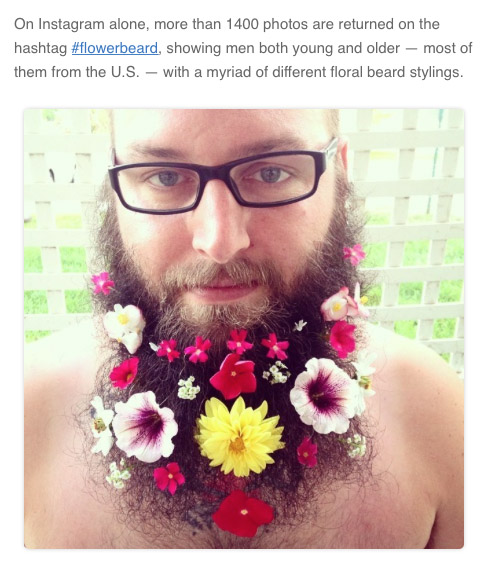 On October 16th, 2013, actress Kirsten Dunst tweeted a link to a gallery of Winward’s photographs. On February 5th, 2014, blogger Pierre Thiot launched the Tumblr blog “Will It Beard,” in which he highlights photographs of various objects placed in his facial hair (shown below). (Know Your Meme) 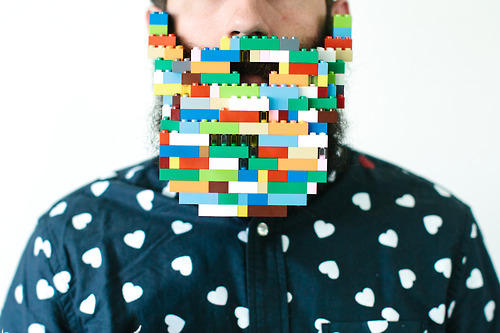