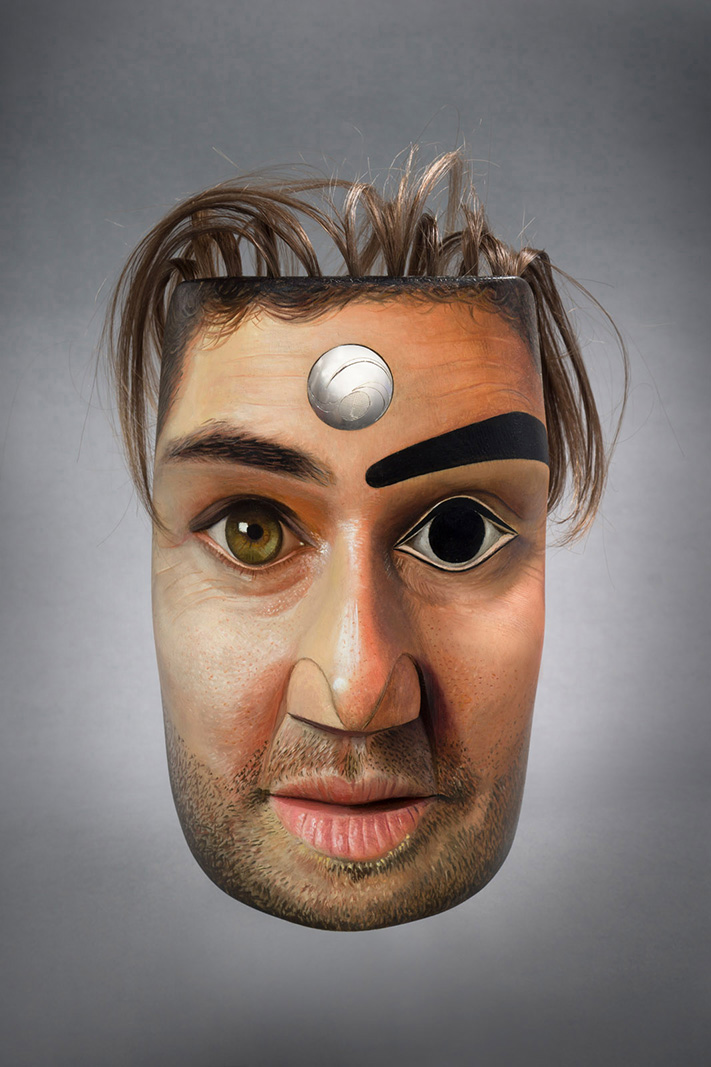 /kəˌlabəˈrāSH(ə)n/ Collaboration is a hand carved and painted cedar mask created through the dynamic partnership of Rande Cook and Carollyne Yardley. It will be featured at Art Toronto 2016 by Fazakas Gallery, Vancouver, BC. The mask builds on these artists’ history of creative fusion they initiated in their two-person exhibition Ravenous (2014). For this show Yardley drew inspiration from Cook’s masterful use of traditional Kwakwaka’wakw First Nation iconography seen on northwest coast potlatch regalia, and Cook drew inspiration from Yardley’s deep exploration of metamorphosis and identity through her richly detailed neo-classical inspired paintings of hybrid human/animal beings. As storytellers in their own practices, their collaborations reveal the deep interconnectedness of world cultures that quickly eschew critiques of appropriation. Rather, their works challenge us to propose and respond to big picture questions that ask how humans have visually animated their histories and experiences to each other through time and space.

Prior to the government of Canada’s implementation of the Potlatch Law in 1880 (a section of the Indian Act that prohibited by law the practice of the potlatch on the northwest coast and the sun dance on the plains, repealed in 1951), trade and commerce between native and non-native communities thrived. Such exchanges proved highly influential and supportive of artistic and cultural production. The legacy of Canada’s colonial policies and legislation enforced over the 20th century obstructed the potential of such early beginnings. Today, in an era of reconciliation, art has once again become a node through which native and non-native engagement is flourishing through agendas of healing, understanding and respect. The

Collaboration mask is an aesthetic response to this cultural resurgence in Canada. 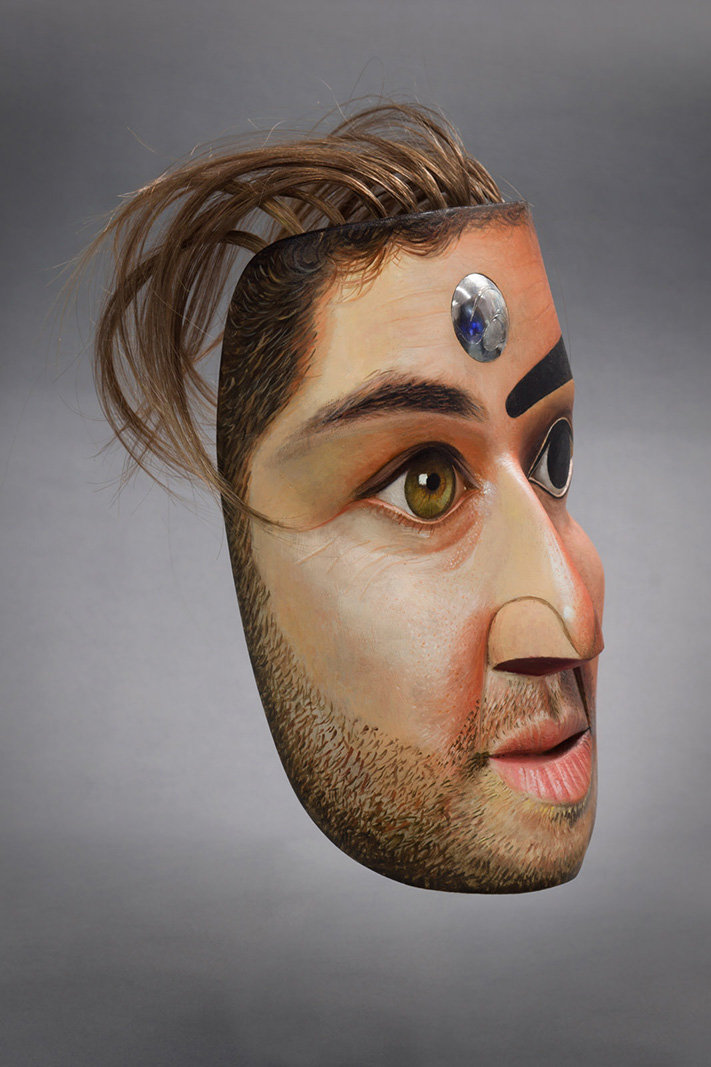 Since time immemorial humans have created masks that they activate through cultural performances in front of an audience. In many examples masks carry sacred knowledge, but in others they tell stories of epic and everyday histories. When Europeans arrived on the shores of the northwest coast Indigenous artists responded to these faces by creating “portrait” masks. They often differed from traditional masks because they did not carry the iconic formline design through painted features or cuts into the wood. Rather, they presented smoothed wood surfaces and were painted with less stylized facial features. At times they were pale in colour and they included animal fur facial hair and period styled mustaches and beards. Masks physically bore resemblance to their referents: explorers, sailors, and missionaries. The mask carved by Cook echoes this history of northwest coast portraiture, yet in the hands of Yardley, the unmarked mask was a tabula rasa. Her response was to layer paint onto the wood surface using her own techniques of portraiture for which the original artist, Cook, would become the referent.

Working from a photograph of Cook that Yardley had taken in 2014 that employed Rembrandt lighting (a technique used in studio photography to highlight one side of the face) Yardley’s detailed brush strokes on the mask record her acute observations of light and shadow, colour and tonality, and texture of Cook’s real face. Yet her painting doesn’t obfuscate the Indigenous origin of the piece. As if in a material dialogue, the artists passed the mask back and forth throughout its creation. This process allowed for Cook’s painting of the eyebrow and pupil onto the right side of the mask, and his addition of real hair to compliment Yardley’s brush strokes. An engraved piece of silver that displays a claw of the Thunderbird sits in the middle of the mask’s forehead. Cook’s family origin stories come from this majestic bird and it is a constant source of inspiration in his own work.  Yet, this small piece of silver is perhaps the strongest symbol of the conceptual underpinning of the engagement between Yardley and Cook. The shape of the silver engraving references the silver and gold coins that were exchanged as part of an emerging economy between native and non-native peoples on the coast. Such monetary wealth based on exchange of goods and ideas spurred on unprecedented cultural production of traditional Indigenous art through trade and ceremony. It also provided context for new forms of art to emerge such as jewelry made from pounded coins. 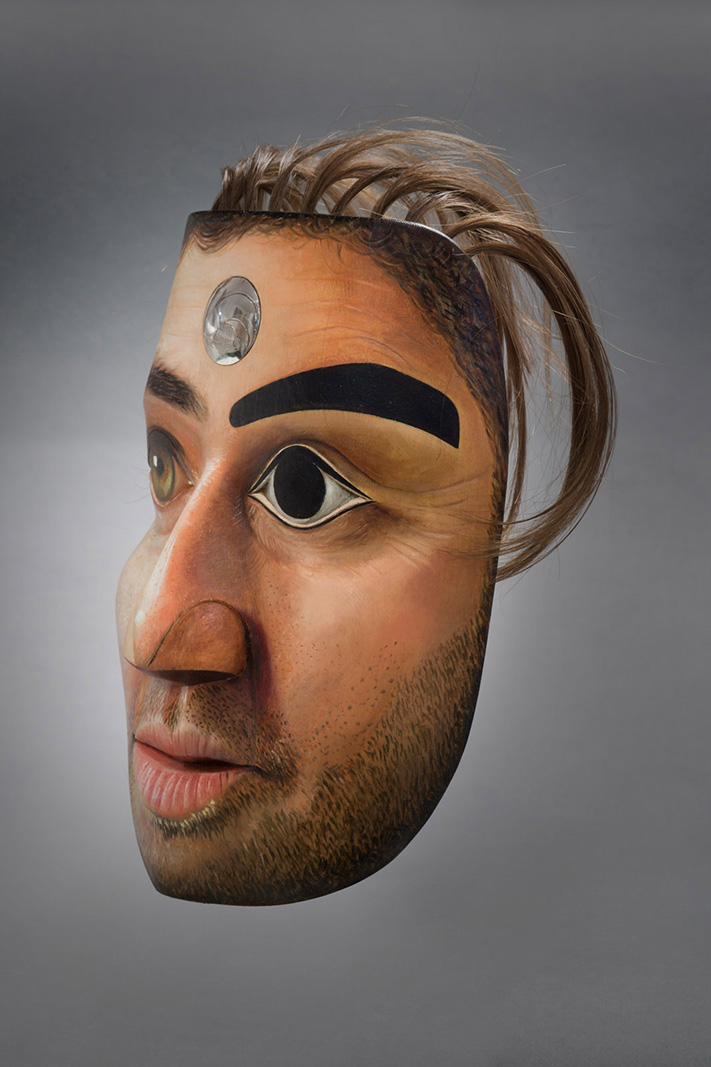 The /kəˌlabəˈrāSH(ə)n/ Collaboration mask is an exquisite example of artistic innovation through cross-cultural exchange. Cook and Yardley share a passion for celebrating new ideas, works, and concepts about art. In a final act of entanglement, Cook and Yardley reverse the performative qualities inherent in the mask/audience relationship. Installed in the gallery, the mask is still/static, and it is the viewer who moves her body to activate the mask. Walking around the mask one sees the piece through three lenses of transformation: an Indigenous representation of figural form, a wholistic face of two worlds, and a painted representation of the photographic record; all of these perspectives are to be celebrated.

An in depth exploration of Yardley and Cook’s cross cultural exchanges through masking traditions will be further explored in their upcoming 2 person exhibition titled Shapeshifting at the Fazakas Gallery in April of 2017.
For inquiries, please contact:

Before going to Art Toronto the kəˌlabəˈrāSH(ə)n/ mask will be featured at Rande Cook’s Ac·cu·mu·la·tion exhibition at the Audain Gallery, Visual Arts Department, Uvic. October 17-21, 2016. Rande Cook is currently the Audain Professor of Contemporary Art Practice of the Pacific Northwest. 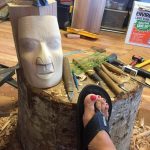 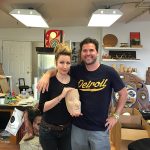 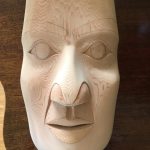 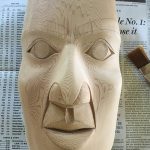 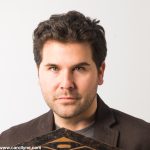 photo of Rande Cook taken in Feb 2014 by Carollyne Yardley for Ravenous exhibition. 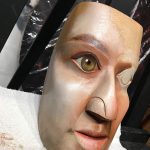 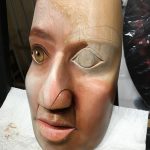 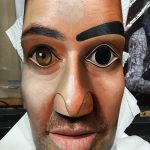 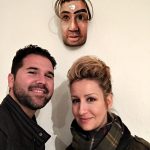