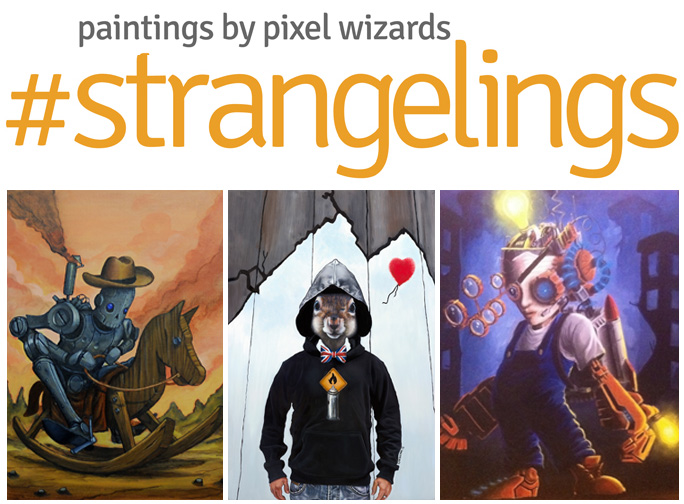 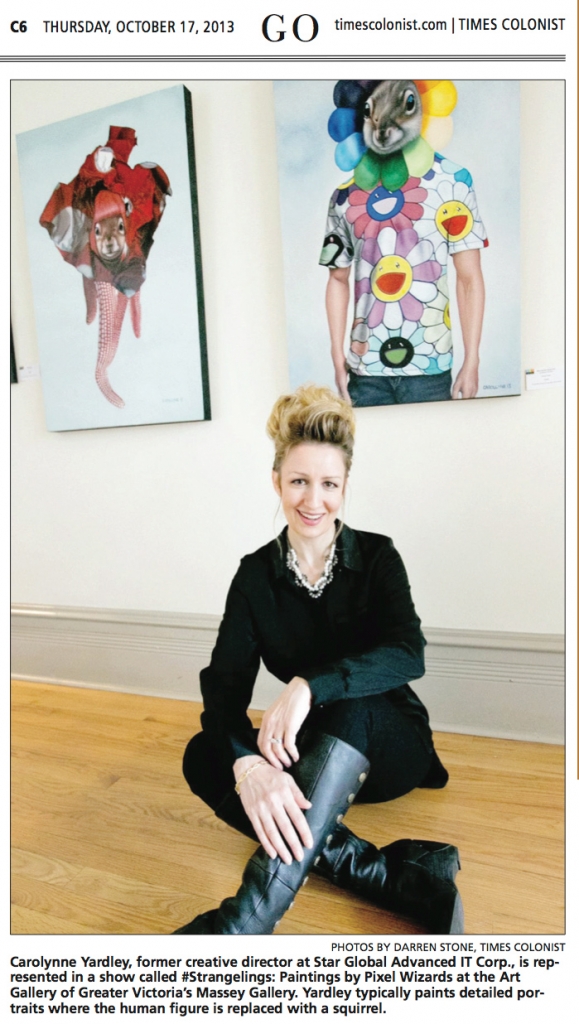 Behind the Scenes October 16, 2013:  Today we got our photos taken by Darren Stone of the Times Colonist. Watch for it in Go! Section Thursday, October 17, 2013 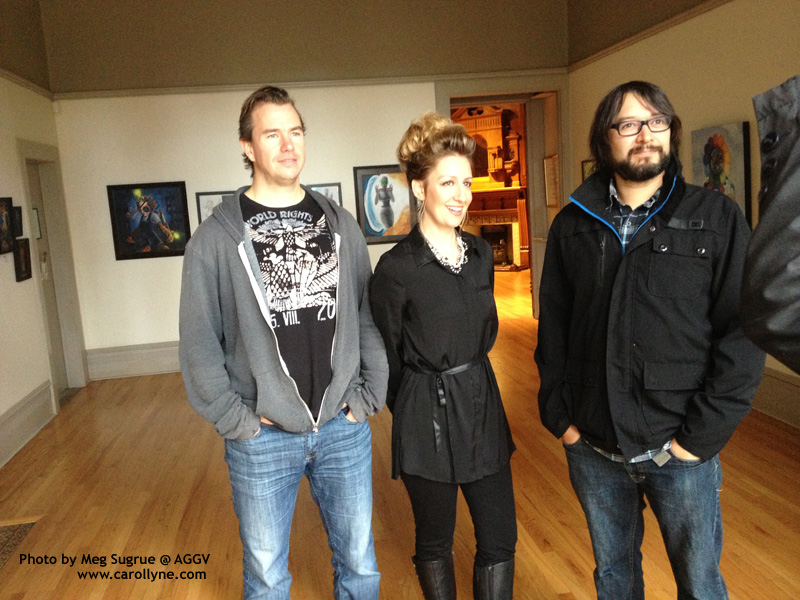 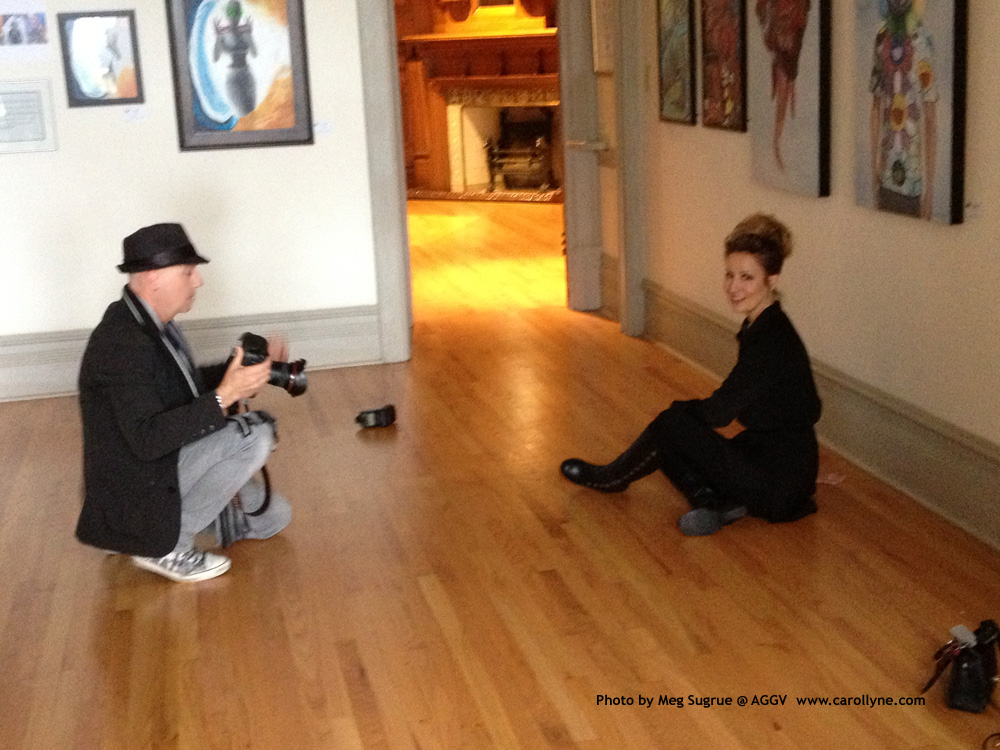 Darren Stone (l) and Carollyne Yardley, Artist sitting under one of her paintings at the Art Gallery of Greater Victoria, Massey Gallery. Photo by Meg Sugrue @AGGV

This show features paintings by three artists who have made professional careers as Art Directors in the game and technology industry. Creatives working in tech are often excluded by their fine art cohorts, due to their association with digital media.
Digital media is both a challenging and liberating medium. However, there are no lucky accidents. It’s during the production stage, before we build our digital world, where the artist is most free to explore, and to give their imaginations free reign.
Many people don’t realize concept development often begins in traditional media – hand drawing, painting, pastels, and photography. In this show, you’ll see the creativity and skill that opens up our story worlds, and give form to the visions that drive a digital industry.
Going analogue, these pixel wizards use paint and canvas to highlight their talents beyond software programs.
#Strangelings weave the art and tech communities together. 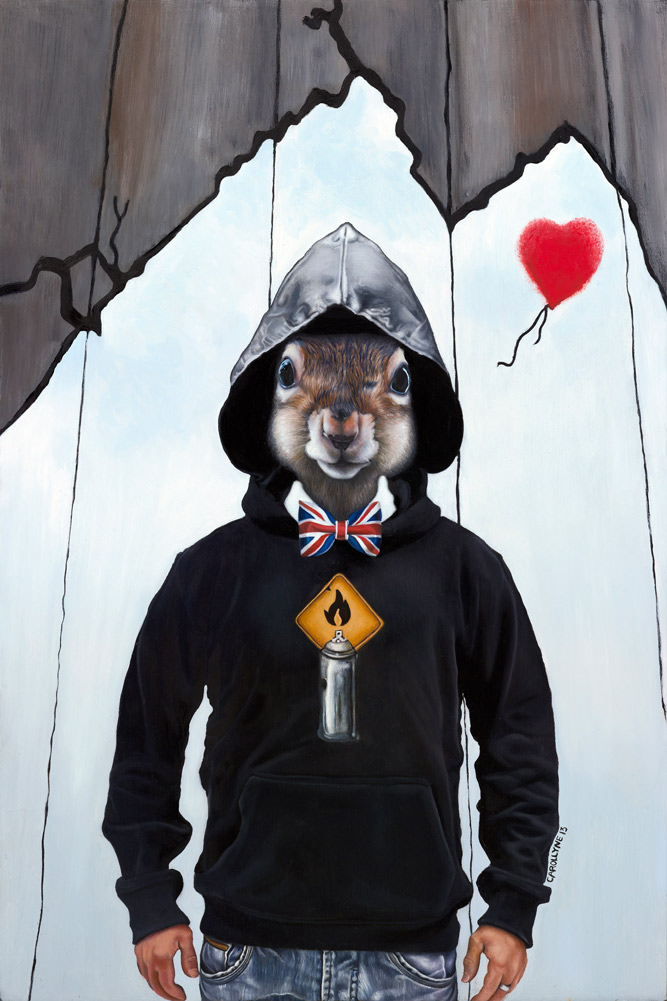 Raised in Victoria, British Columbia, Carollyne Yardley completed two years in the Faculty of Fine Arts, and is a graduate of the University of Victoria, where she completed a double major in Psychology and History in Art. Most recently, she has taken art classes at the Victoria College of Art and studied with The Ryder Studio School in Santa Fe, New Mexico.
For over thirteen years, she was the founder, co-owner and Creative Director of a technology company specializing in visual communications for websites and custom software interfaces.
Specializing in her style called, “Squirrealism,” Carollyne has been featured recently on CTV News, CFAX1070, Vic42, Monday Magazine, YAM Magazine, and the cover of Focus Magazine (Dec 2012 and Feb 2013).
Carollyne is interested in the repetition of imagery and brand development. Her work is based on imaginary, characters; misfits and alienation. Or perhaps an alien nation. The squirrel face is a metaphor for the secrets we keep. 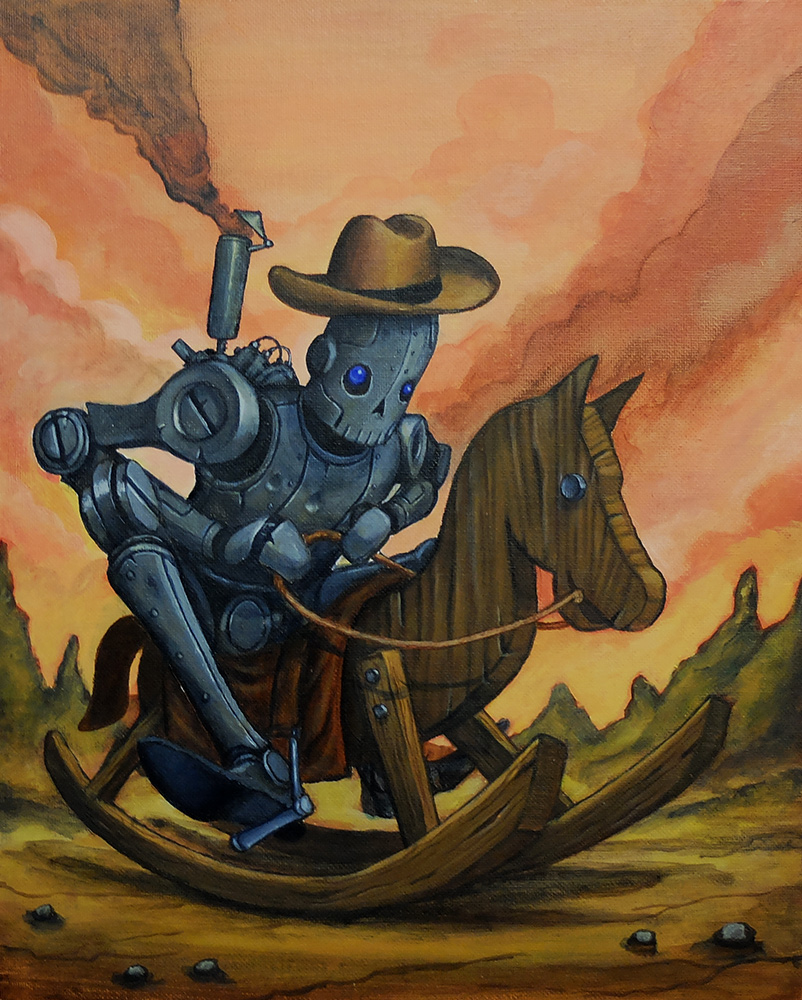 Jose Brand was born and raised in the northern Canadian city of Terrace,
BC. As a kid he spent most of his time outdoors biking and snowboarding on
the nearby mountains. Aside from this he has always made time for art, and
has been drawing for as long as he can remember. Jose feels fortunate to
have grown up with a very creative family that has always been supportive
of his creativity.

Diving into digital art has changed Jose’s life.  After starting to use
Photoshop about 13 years ago, he was hooked.  Jose now lives in beautiful
Victoria, BC where he works as Lead Concept Artist for the social gaming
company Kano Apps. He spends most of his days drawing zombies, pirates,
and Vikings.  Even though he draws at work full time, his passion for art
and wanting to create drives him to spend even more time drawing and
painting.

Each painting Jose creates is part of a world he envisions, where the
painting is a single moment in the life and story of each character. 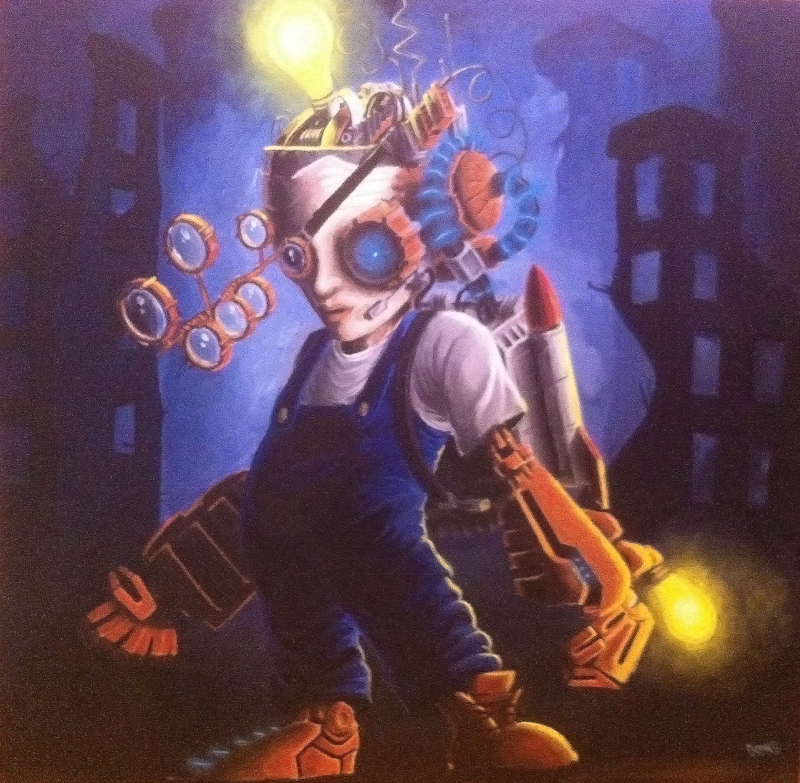 Born in Toronto, Paul Dowd moved out to Victoria B.C. at age 12. After spending his youth absorbed in both fine art and music, Paul studied for a year at the Victoria College of Art then took off for a music tour around Europe with ‘The Bill Hilly Band’. Paul spent several years playing music with a number of groups in town and then decided to apply his art skills in a digital medium, as well as actually make a living off art.

He started doing web design (or today called User Interface design) and shortly after had the opportunity to do concept art for a space RTS game called Sins Of a Solar Empire by Iron Clad Games. He then got a gig with a start-up called Zynga. He was the primary artist in the beginning doing all the branding (including designing the Zynga Logo), art, animation UI/UX design for all of there titles. As they company grew, he began working on single titles, first spending a year on Zynga Poker, then moving to a new game that was in development called FarmVille. He and two other artists produced the game which Paul thought was kind of silly, but once the masses got a taste it grew to 33 million players a day (at that time the largest game in history). Despite the fact he was remote, he quickly climbed the ranks to become one of the Art Directors on a team of 20+ artists. Paul spent 4 years with the team and produced several expansions. This was a very fun and busy time, but proved to be a great growing experience: a place where one truly surrenders their ego as work is critiqued dozens of times a day.

Paul very much enjoys hands on painting which sat on the back burner during this 10 year stint into the digital realm. After a long hiatus he’s picked up the brush to create fun nerdy creations as well as continue some fine art expressions. There’s nothing like processing your emotions on canvas, it’s quite an amazing experience.

UPDATE:  Just dropped off artwork to Art Gallery of Greater Victoria today. Here’s a sneak peek of a couple of pieces! 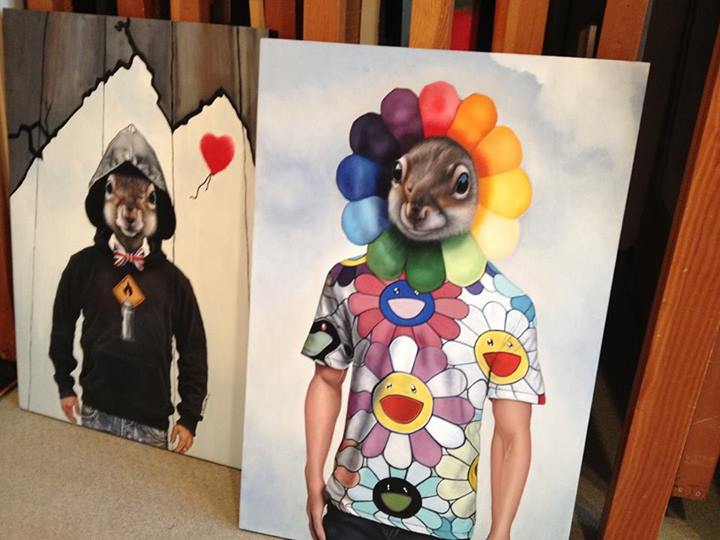 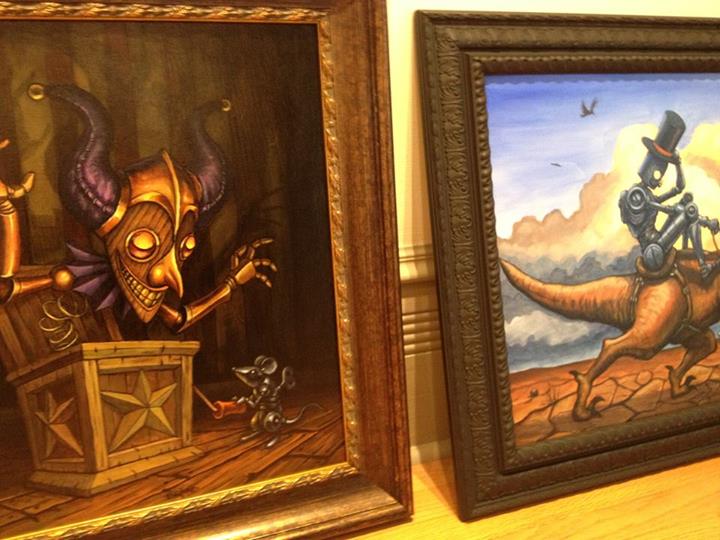