The Girl with the Squirrels by Shanice Wolters

The Girl with the Squirrels by Shanice Wolters

I wanted to share this with you. Shanice Wolters contacted me last year on March 7, 2012,when she was a Journalism and History of Art student at the University of Victoria. Shanice was one of the first people to write about my artwork and the squirrel paintings. I hope you enjoy reading it, as much as I did.

The Girl with the Squirrels

Carollyne Yardley’s art can easily be described as its own genre of unique eccentricity. It’s a mix of dreamy costume designs, the world of Alice in Wonderland, and a child’s wildest dreams about the squirrels in their backyard. Yardley is dressed in stylish black, she oozes charisma and creativity, and often laughs musically and loud. However, it’s Yardley’s art that catches peoples eyes, she paints portraits of squirrels in costumes. Looking at her work, the squirrels almost come to life, they’re beautifully glossed over, outlined with vintage frames she found herself. As for the squirrels, they evoke a strong sense of personality, dressed in Marie Antoinette ensembles – such as Romance Squirrel – a royal-looking creature with a castle in background, or Red Hat Squirrel – a squirrel that oozes pure femininity and class, wearing pink gloves and a wonderful red hat. Yardley’s take on pop-surrealism is not often explored and has been highly reviewed, her career in Victoria’s art scene is getting exceptional notice. 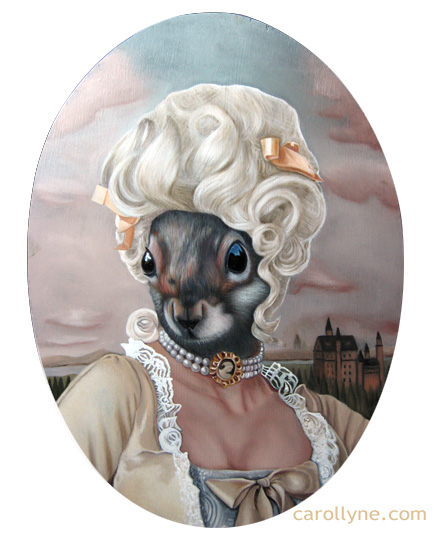 Romance Squirrel | 10 X 14 | Oil on Board with frame | Carollyne Yardley | Available for purchase.

Yardley graduated from the University of Victoria with a double major in History of Art and Psychology. “I went to university with the intent of being an artist,” says Yardley, “my friends were speculating on my chances of having a career in art, and I thought that perhaps they had hit on something.” Yardley entered the world of web design in her finishing year of university, co-owning a Victoria-based web design company, “we built our desks from hand, and we got a fax machine, we had our little office with three paying clients.” In September 2010 she decided to focus on her greatest passion, painting. “I thought about whatI really like about art, what are the things that attracted me? It was all the outfits, all the gowns, dresses, shoes and hats,” she says enthusiastically. “So I made a list of all the things I really liked and it was all clothing. I started looking at photographs that I liked or that I had taken, and it was the costuming in them that I loved.” Using squirrels in her art was a spontaneous choice, “I just pulled out some master paintings like Raphael and did copies of them, and there was one Raphael painting that I called Shaky and the Princess,” she says, “and my husband said, ‘hey you’ve got a spot there in the Raphael painting on the woman’s lap, why don’t you put a squirrel there?'” 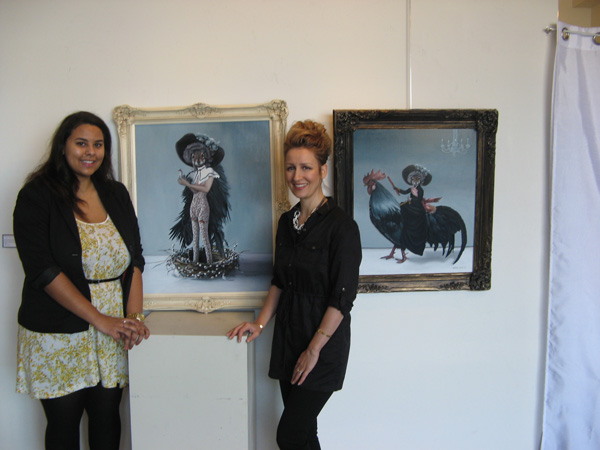 Yardley is not simply showcasing squirrels in outfits. There is an underlying message to her work, she is interested in observing the impressions people get based on presentation. She has stripped her paintings of any identifiable human character, so the viewer is forced to think about what the personality might be like. “I pulled out a bunch of books from my mom and dad’s place and thought: ‘it’s ironic that I’m painting animals in clothing because I read all these books growing up,’ for example, there were lions and they had suits, and it appealed to all kids from across all cultures, you weren’t feeling left out.” When thinking of her artist statement Yardley says she didn’t have any second thoughts after reading her favourite childhood books. There were animals in clothing, typically a humanistic element, until you are forced to think about what kind of animal they are, such as their job, or personalities, which can be deciphered by what surrounds them, which is the same impression she makes with her squirrels. 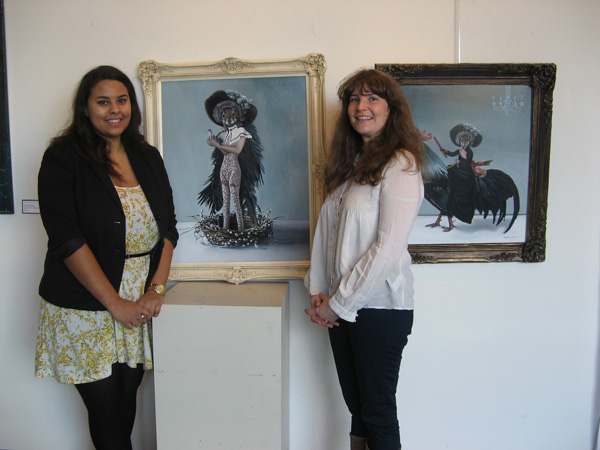 In following next year and a half her career progressed, showcasing her art throughout Victoria, including the Victoria Emerging Art gallery. “When I looked at her work I thought what a distinctive style she has, she is such an exceptional painter, very eccentric, and it shows in her work,” says Ellen Manning, owner and Director of the Victoria Emerging Art Gallery, who has showcased Yardley’s work in her gallery, and sold each one of her pieces on display. “Technically her work is so sound and she has really evolved…she has a really bright future as an artist,” she says, “I am really looking for artists that have a really unique narrative, and a distinctive style. She is definitely an artist in that regard.” 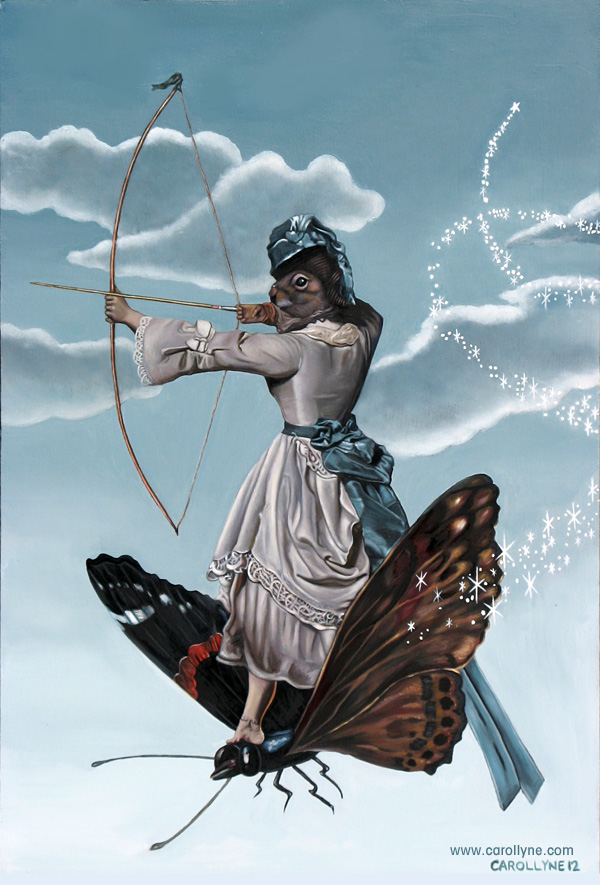 Cupid and Psyche, Oil on Board, 2012, Carollyne Yardley

With only two years and a half working as a professional artist, Yardley is blazing through the art scene and setting it on fire, with eager plans for her artistic future. “I believe you can paint so many paintings in a year, you can sell so many paintings for ‘X’ amount of dollars, but you are still limited for your time because your time is what makes the art” says Yardley, who is looking heavily into licencing her work, “I want it to be a real collector’s item,” she says. “When people aren’t really wanting to invest in a painting they can still have a collection of images.” 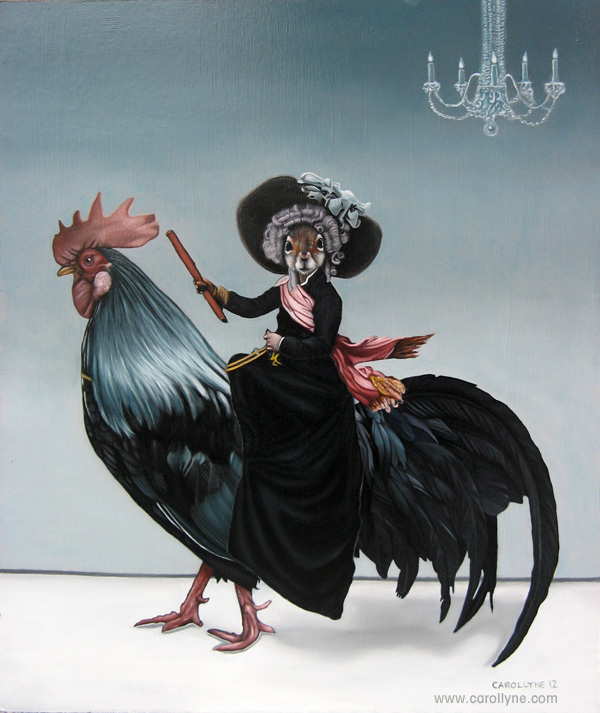 Yardley’s decision to become a full-time artist has many thrilled, and it is clearly paying off. “She just kind of thought, ‘I’m going do this art thing,’ she is an artist who has just got so much fuel right now,” says Manning, “she doesn’t rely on grand ideas and complicated themes for her to be inspired.” Yardley’s motto is simple, and her ideas are spontaneous, “I like costumes, fun, funny stuff, and I like things that are a little quirky and that have a bit of a cheesy element to them.”