Behind the scenes! A studio tour and interview by @Kate Jones of Pennello Lane, Creative Canadian Women – Pop Surrealism

Behind the scenes! A studio tour and interview by @Kate Jones of Pennello Lane, Creative Canadian Women – Pop Surrealism

As posted previously, Kate Jones author and blog mistress of Pennello Lane, came to my studio with Ellen Manning and Stephanie Eisenbraun from The Apartment Gallery.
We were joined by Jen Steele Photography. Gnome feature in photograph by Tierre Joline. 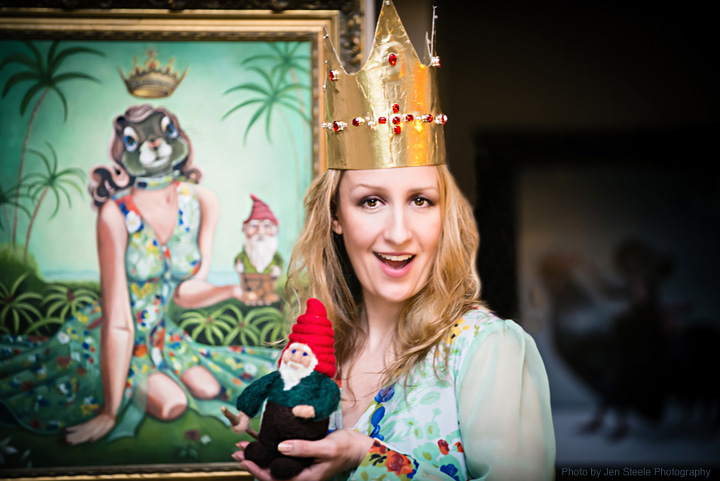 Read this wonderful article written by Kate  called, Romancing the Squirrel in the studio.
I adore how she captured a behind the scenes look at my studio, and a story my mother remembers best.

Read more about how I cut the entire back out of a 1960s paisley dressing gown of my mother’s closet to make myself a skirt, leaving the remaining piece on the hanger. The act would be undiscovered for six months. Badass behavior and more. 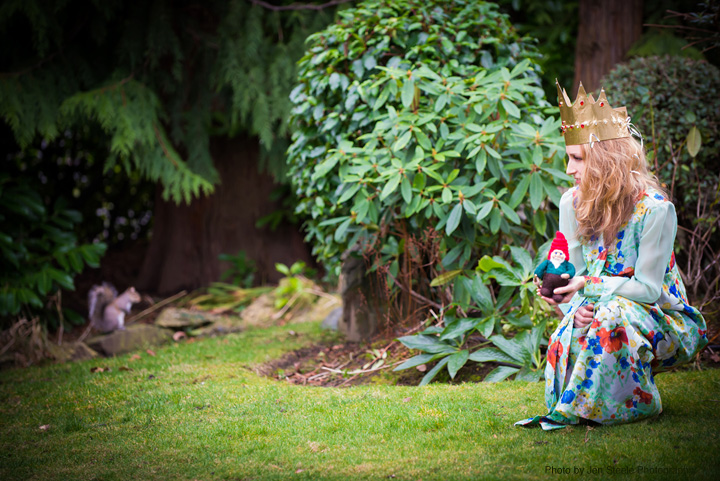 Carollyne Yardley with gnome, and squirrel in the garden. Photo by Jen Steele Photography 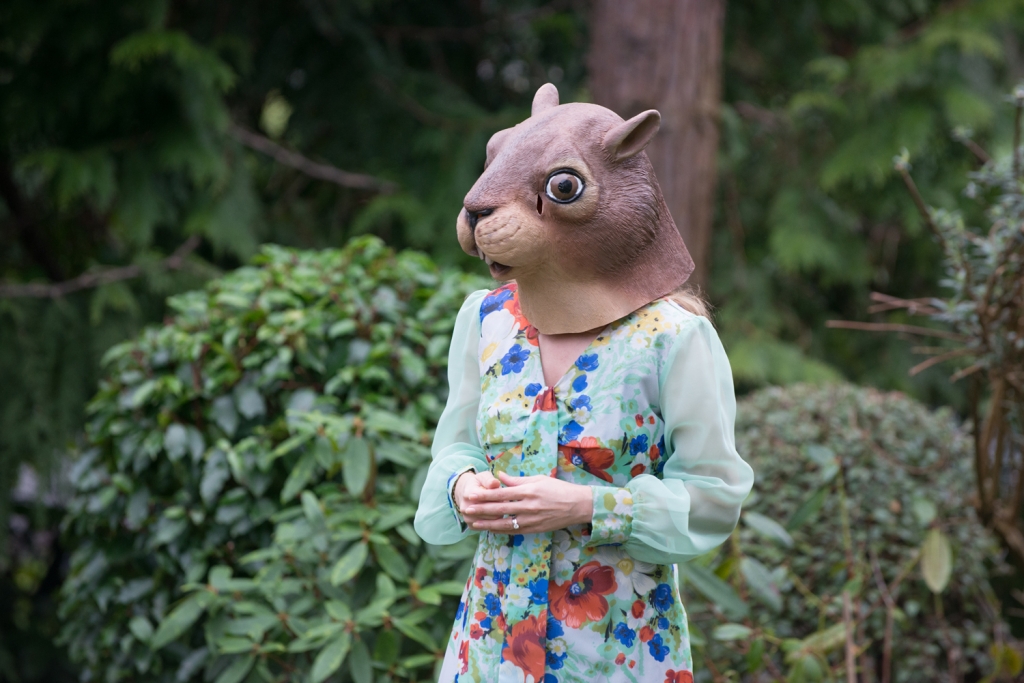 Romancing the Squirrel in the Studio 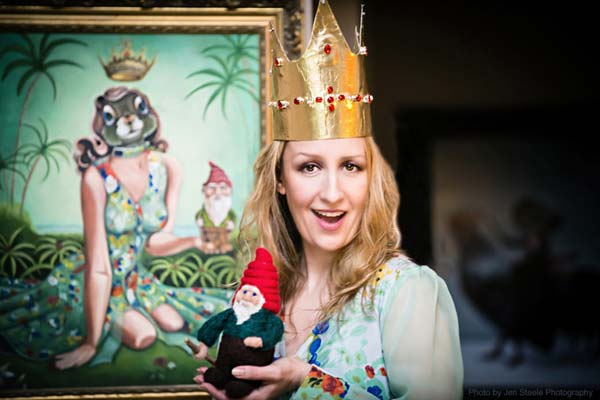 Pop surrealist painter, Carollyne Yardley, is sometimes referred to as “The Squirrel Lady.”

Having decided to make a career switch a few years ago (previously she ran a successful technology company, Star Global), she taught herself to paint by copying masters such as Ingres and Raphael. She added a squirrel to the first of these paintings, then the squirrels themselves became the focus. She is now known for her compelling images of the inhabitants of an imaginary world – hybrids of humans and squirrels, often dressed in elaborate costumes.

Recently I was invited, along with Ellen Manning and Stephanie Eisenbraun from The Apartment Gallery, for an afternoon visit to Carollyne’s beautiful home and studio in a leafy Victoria neighbourhood. We were joined by photographer Jen Steele, who took the photos you see here.

Carollyne and her husband, Lawrence, have lived in the house for five years. The stunning, soaring entryway is lined with paintings, the collection of images in ornate frames (she collects second-hand ones) giving an eclectic feeling of vintage elegance. 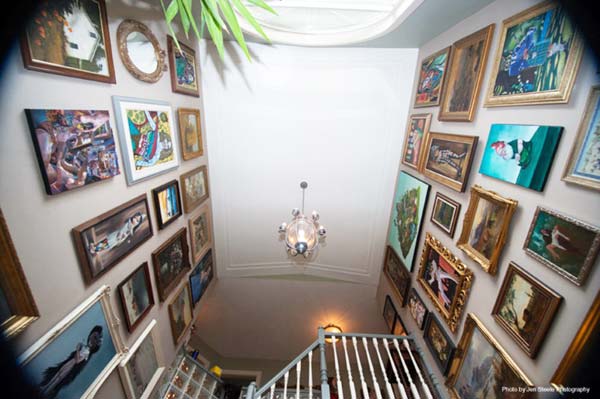 Heading upstairs to the main floor of the house, the inspiration behind Carollyne’s work becomes apparent. Large windows not only infuse the room with natural light, but provide an expansive view of the front yard, abundant with squirrels. “We see them all day long,” says Carollyne, “in the trees and running on the power lines. This environment fosters it completely.” 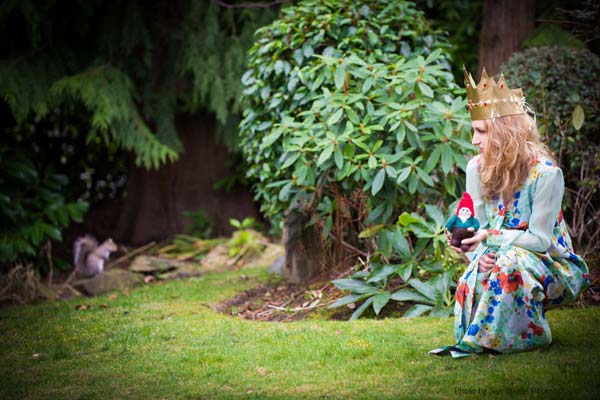 Another influence is her interest in vintage clothing, which comes through in the costuming aspect of her work. Carollyne has been building a costume collection since high school. “That’s what I wore in school, I made my own clothes.” She tells a story of cutting the entire back out of a 1960s paisley dressing gown in her mother’s closet to make herself a skirt and leaving the remaining piece on the hanger. The act would be undiscovered for six months. “I was a bit of a bad ass,” she says, also describing her high school style as “vintage old lady” and “freak costume show.”

The studio space is adjacent to the main living area of the home. Carollyne spends six to eight hours per day here. “I’ll start painting at one in the afternoon, that’s my favourite time,” she says. 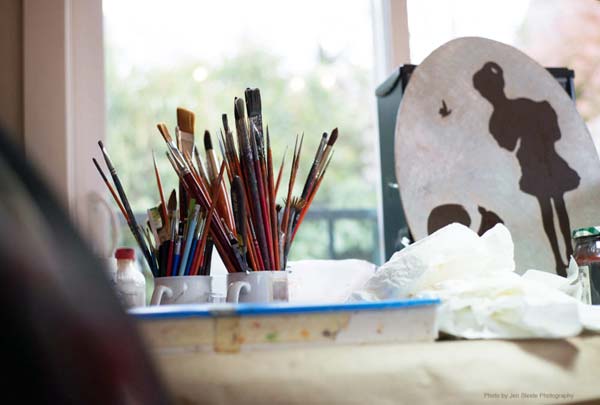 Before settling down to work she makes sure she has “tea, lots of liquids, sometimes a piece of chocolate or popcorn or something. I get my painting clothes on, and make sure everything is where it should be, so I won’t have to stop and look for something. Sometimes I have headphones on and listen to music, so I’ll keep it close by. I keep my iPhone close so I can check Facebook and Twitter all day, because I’m an addict! 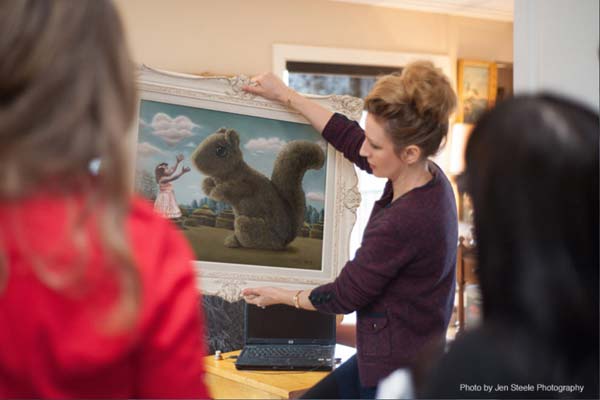 Then I paint until about 3:00 and have a little break. Have some tea, look at the squirrels out the window, then back at it again until about 6:00 and stop for dinner. And then I can paint straight through, while Lawrence is watching TV. That’s another reason I like to be up here – we can be together.” 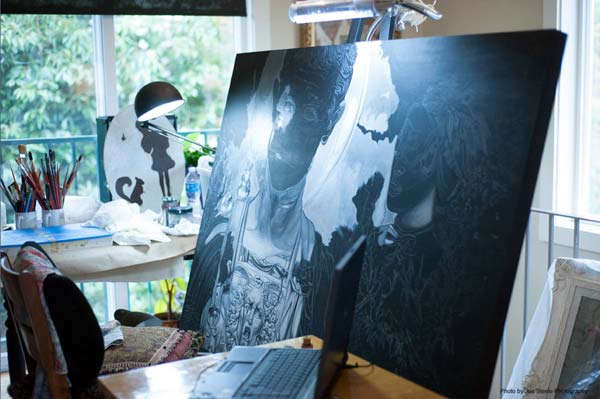 She uses a painting stick (or maulstick) to rest her painting hand on. “Some people like a loose hand, I actually like my hand to be very steady.” Her process involves starting with a layer of black gesso. She then sketches with white pencil crayon, followed by water-based oils, followed by linseed-based oils. Her under paintings are done in gray scale (a grisaille layer). “It’s a math equation, essentially, with your eye,” is how she describes it. “Instead of looking at this colour and that colour and trying to decide if they’re the same value or not, I imagine it as a grey scale. I was having trouble seeing the value of a pink against a green, but I can see the value of a black against a white, and everything in between. It’s a way to simplify the equation and get the realism that I’m trying to achieve.”

Soy based, food grade quality brush cleaner is a necessity, due to the location of her studio in the house. “We’re living here next to where I paint, so I can’t be using the combustible, bad stuff.” The greenness of the studio, in fact, extends straight through to the recycled frames she uses. 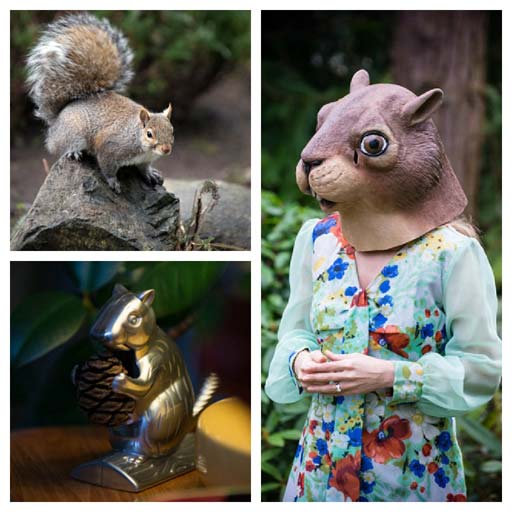 Being associated with squirrels as she is, it’s inevitable that Carolynne receives some squirrelly gifts. There is a squirrel door stopper, a charming silver squirrel on a table, napkin holders, a large mask sent by a follower in Seattle who has bought some of her pieces, even “three packs of squirrel underpants. One day when I do a show, I’m actually going to take all the squirrel stuff and have a display of all the paraphernalia.” 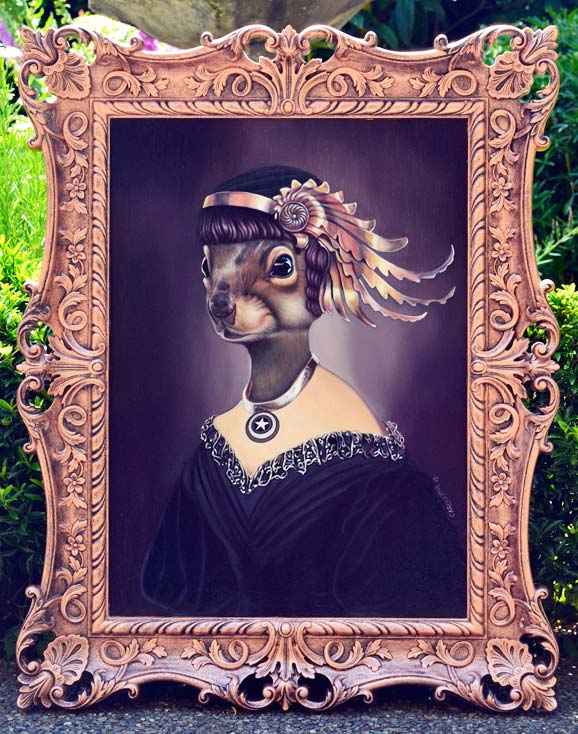 When asked about her favourite thing in the room, the one she’d grab in an emergency, she paused to consider, before responding “I’d take that painting, ‘The Avenger.’ She has the Star Global shield, which is the logo we had for Star Global. Because of the transfer from one life to another, I took the logo, and I use it in the Carollyne logo. So it’s the shield of Captain America and also the Star Global logo, and she’s The Avenger. The fight to make that change – you have to fight for any career change or anything you need or want to do.”

Thank you, Carollyne, for this exclusive peek behind the squirrel mask!

Thanks also to The Apartment Gallery for arranging the studio tour, and Jen Steele for the beautiful images. Please check out their web sites!

Carollyne’s work will be featured in the upcoming exhibit “Romancing the Squirrel – A Retrospective” at The Apartment Gallery in Victoria BC (February 22 through April 1). You can also view her work on her web siteand keep up with her news on her Facebook page.

“The Avenger” image courtesy of Carolynne Yardley. All other photos by Jen Steele Photography.