A huge thank you, and sloppy squirrel kisses to Robert Amos for his wonderful write up about the Funny Face Squirrels at Red Art Gallery (group show runs until August 31, 2011).

Take a walk through the village’s eclectic exhibitions 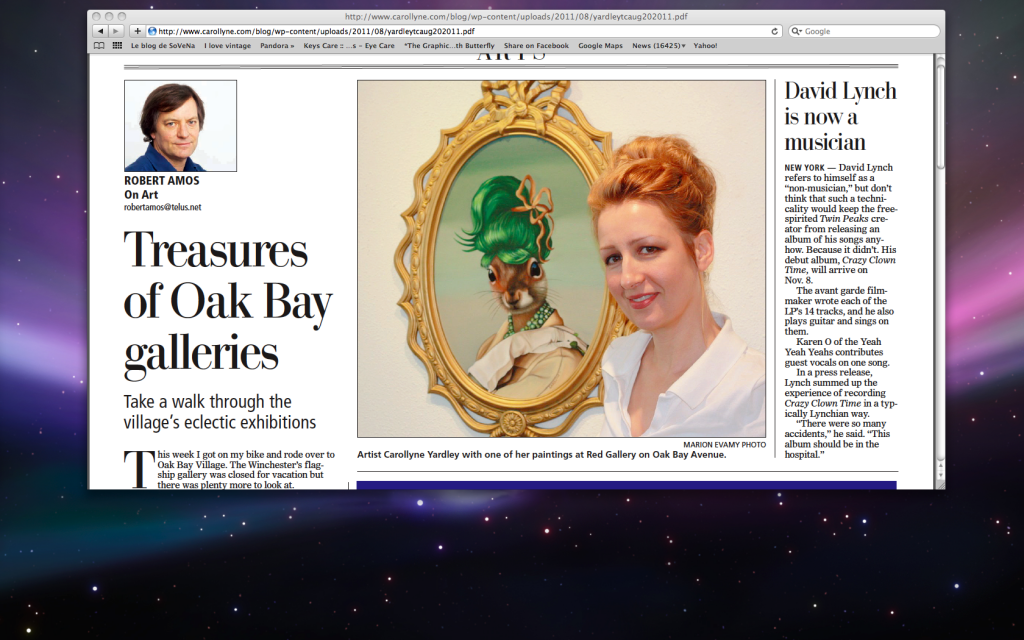 This week I got on my bike and rode over to Oak Bay Village. The Winchester’s flagship gallery was closed for vacation but there was plenty more to look at.

Across the road and down a bit is The Gallery in the Oak Bay Village, a long-established shop where someone always seems to be discussing their framing needs (2223a Oak Bay Ave., 250-598-9890). I was left alone to peruse the floor-to-ceiling hanging of choice little paintings. The size of the shop precludes anything large, though Kathryn Amisson, who has switched from pastels to oil paint, offers a sizable view of the sun setting through a band of clouds at Long Beach.

The Gallery always has work by their standbys – Keith Hiscock’s plein air oils, Brian Johnson’s sophisticated watercolours. New to me at this address are the effortless and richly coloured arbutus trees by Jeffrey Boron.

The Avenue Gallery, on the other side of the avenue, has more space and a more challenging taste in art (2184 Oak Bay Ave., 250-598-2184). Up front were a half dozen canvases by Andy Wooldridge showing meticulously painted simplifications of rocks and trees mirrored in the water.

Of particular note was his night view with a figure, known as the Keeper of the Fisgard Light. The Avenue is gearing up for an exhibit of large-scale work by their artists. This won’t be a challenge for some – Russ Willms can hardly paint his stylish women less than life-sized. I am looking forward to seeing the still life Catherine Moffat has promised. Known for her tiny, exquisite watercolours, she recently made an oil about as big as she is!

A short walk down the north side brings you to Eclectic Gallery (2170 Oak Bay Ave., 2505908095). What began as a shop of decorative housewares a couple of years ago is inexorably becoming a gallery. Though they still stock a tantalizing selection of semi-precious stones and jewelry, and porcelain by Harumi Ota, the current show of drawings by Nicholas Frenette demands attention. Frenette is a young man from Vancouver with a curiously baroque consciousness and an obsessive way of working. Like a young Mozart, he is blessed with an uncanny skill and somewhat perverse imagination.

Equally perverse are the squirrelly portraits by Carollyne Yardley, which intrigued me when I visited the little gallery called Red just down the street (2033 Oak Bay Ave.). Red began a few months ago as a showspace for Marion Evamy, a prolific and free-spirited painter whose nearabstract work is very attractive. Professionally, she’s also booked up months ahead for her colourful and energetic dog portraits. Now, due to popular demand, she has generously decided to share her gallery with some talents she just can’t resist.

For example, those squirrel portraits. Beautifully painted and hanging in ornate oval frames, Yardley’s nutty buddies sport space helmets, elbow-length gloves and green upswept hairdos. Yardley, until recently a web designer, explains that she “began to remove the mask of technology to emerge as her true self, standing with her hands on her hips, yelling and laughing at the squirrels in her yard.” Go figure.

Through the window I could see a dozen intent students working at an etching press, deep in a course in photo-gravure. The prints were stacking up around them. That course was to immediately be followed by a weekend workshop focusing on the Leica camera. It may be well into fall until it once again becomes a gallery.

Despite an excellent lineup of shows at the Art Gallery of Greater Victoria, things were quiet (1040 Moss St., 250-384-4171). I had the exhibit of modern Canadian furnishings all to myself.

Curated by Victoria’s Alan Collier, this is the definitive look at chairs, record players, tableware and art pottery made in this country in the 1950s and ’60s. So much is hauntingly familiar.

Downtown, I paid close attention to Rande Cook at Alcheringa (665 Fort St., 250-383-8224). He is taking the Kwakwaka’wakw visual language to places it has never gone before. His form lines are unexpectedly sinuous and remarkably coloured.

They pass over and under each other in transparent ways, weaving new stories about familiar characters. Among other surprises is an old-fashioned movie camera he made of cedar. A swivelling mask on the back lets you look through to the image within, raising unanswerable questions for our media-soaked age.