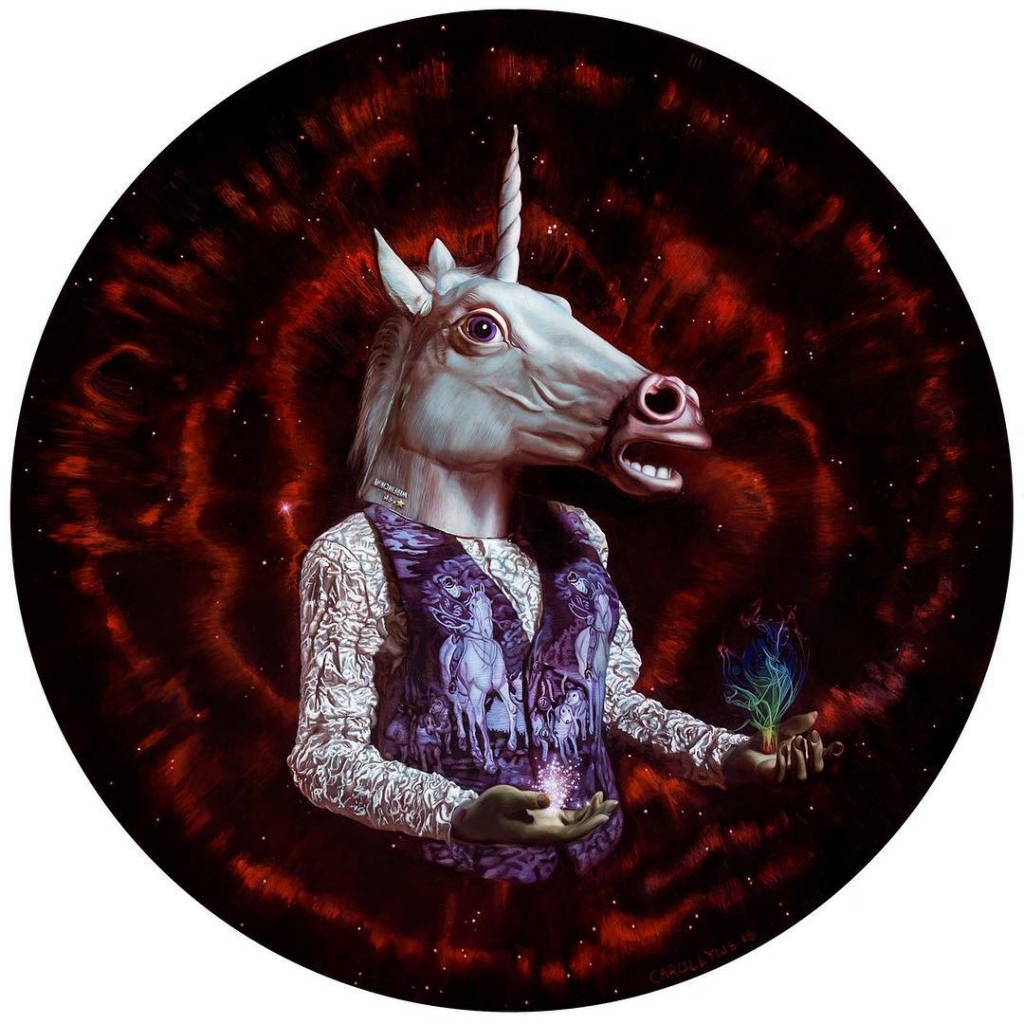 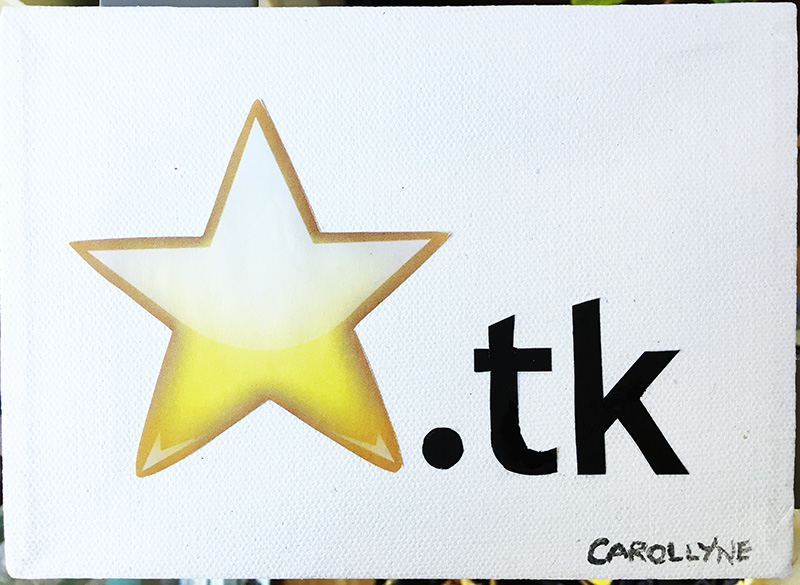 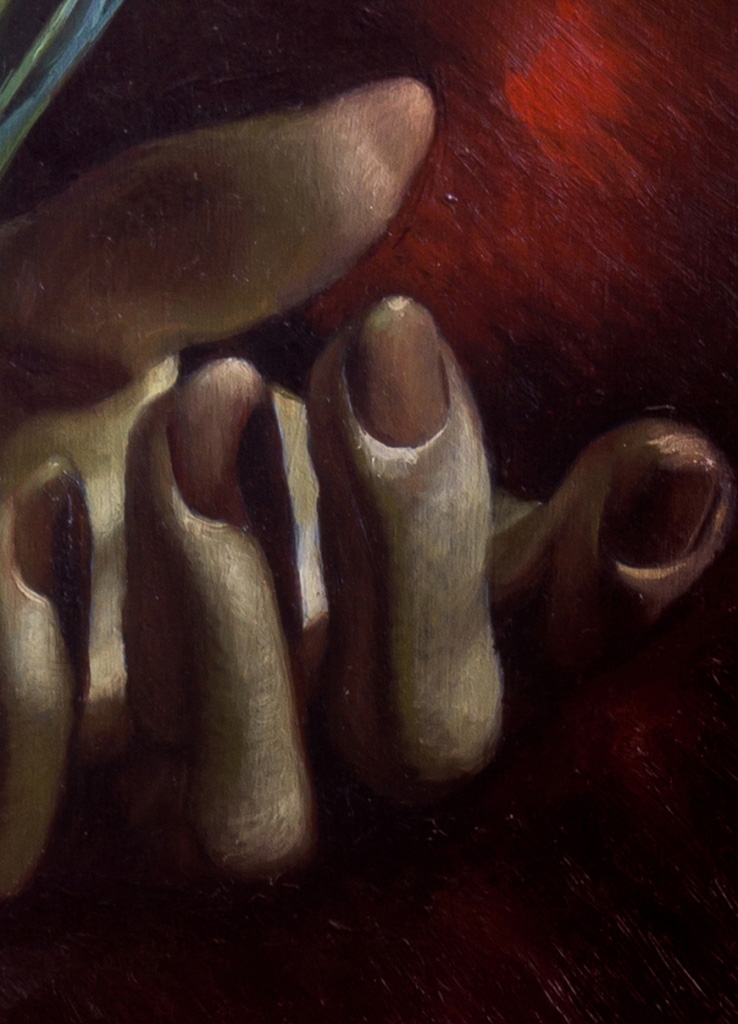 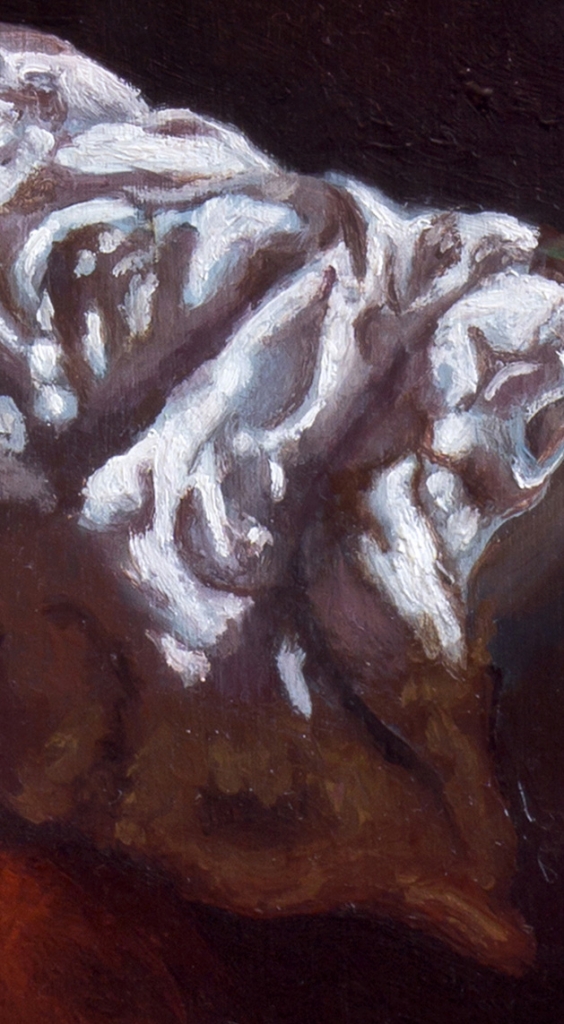 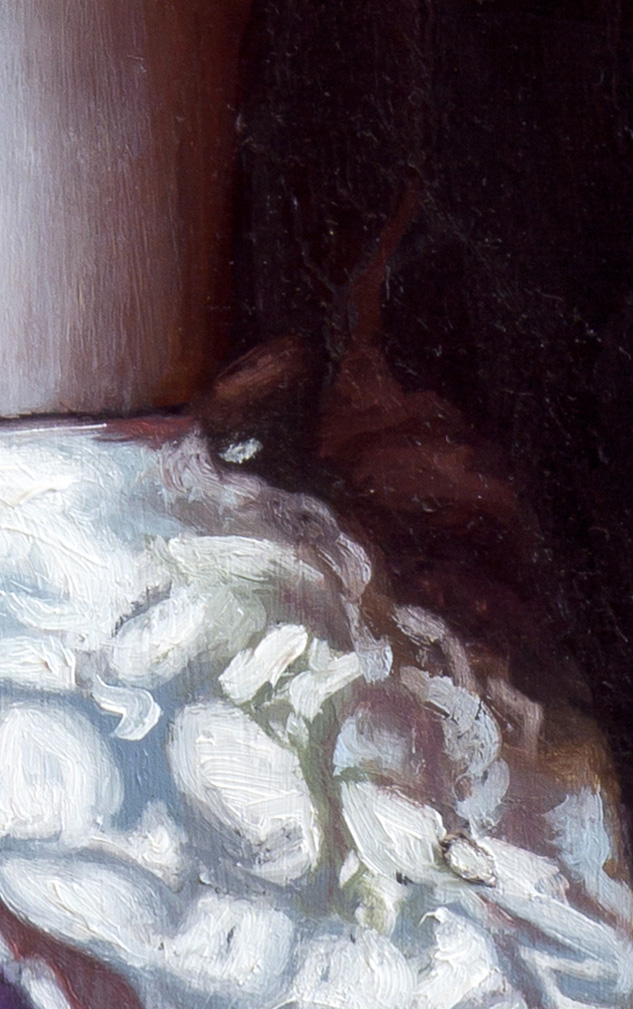 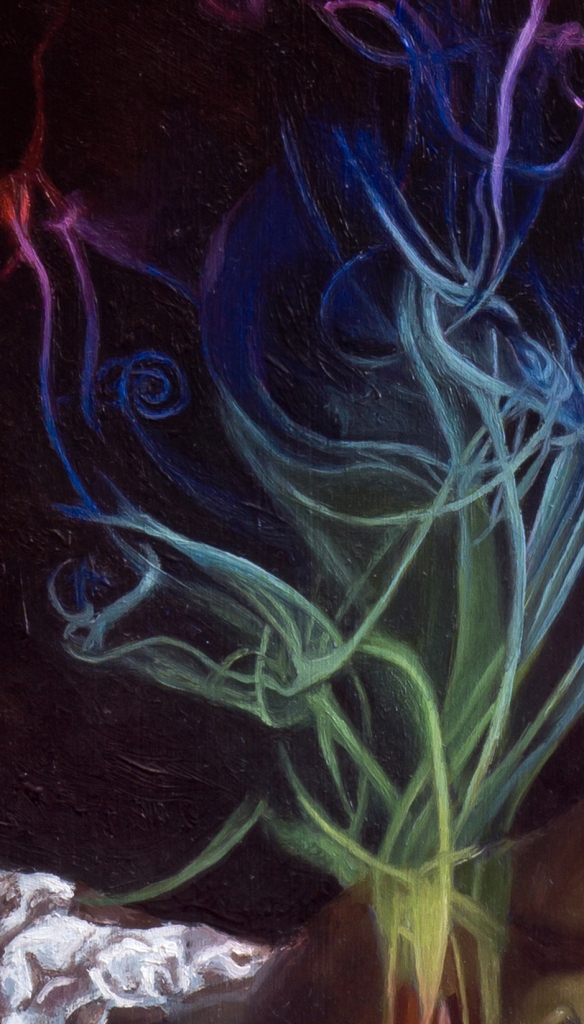 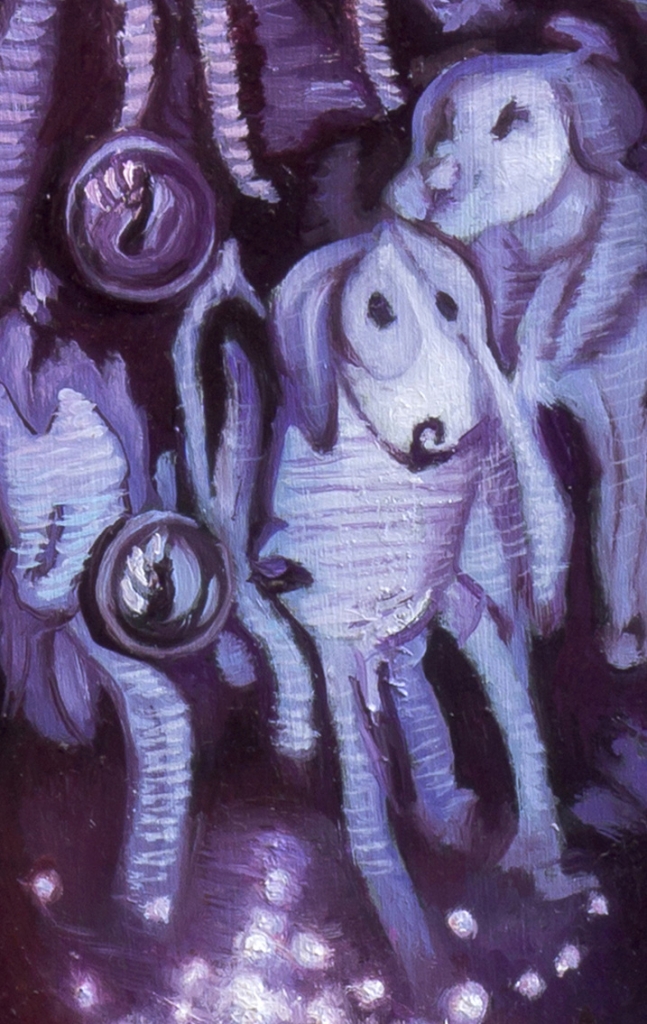 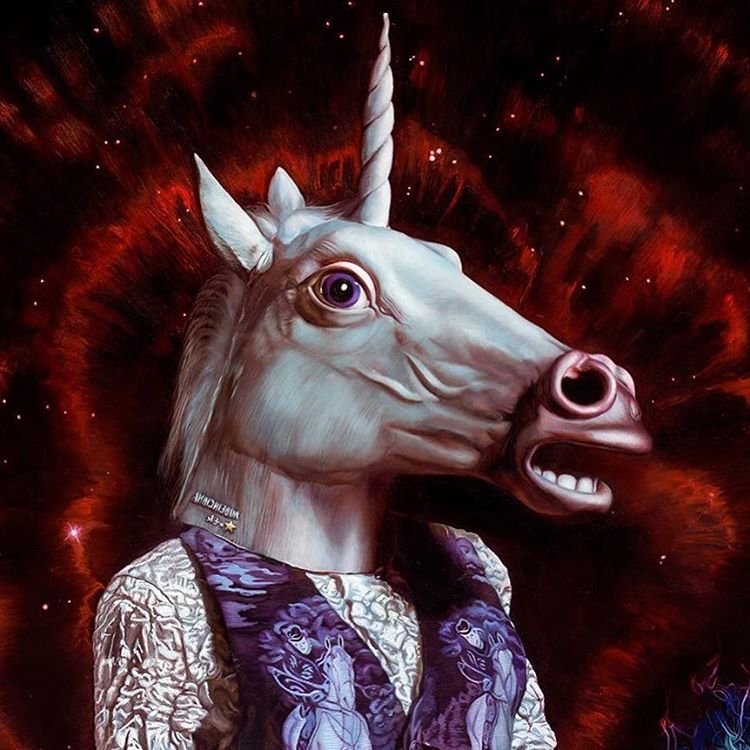 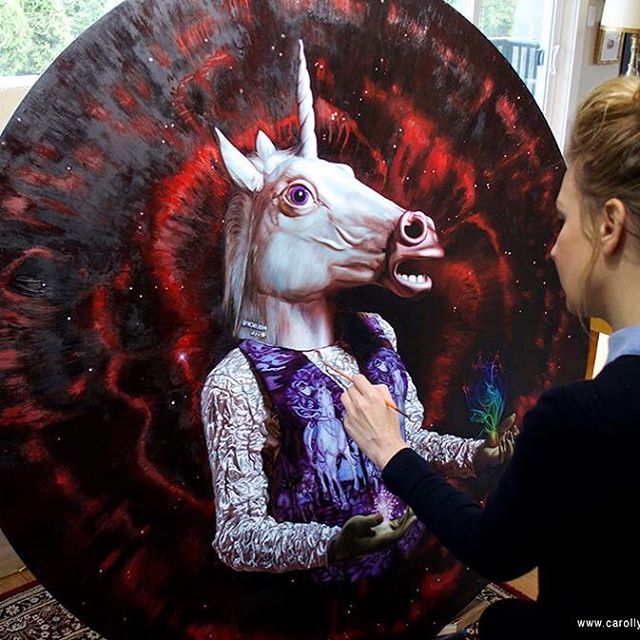 My new series is all about unicorns and sh$t, on tondo bitchez. Oil on panel. More betta pics soon, my pretties. Unicorn mask by Archie McPhee @zoomar

Bob the Unicorn from Constellation Monoceros was a Magician IRL.

is the long title.

Bob the Unicorn from Constellation Monoceros was a Magician IRL (in real life) is the long name of my unicorn painting. It explores how the unicorn has been represented thoughout the history of art. My latest body of work, including “Bob the Unicorn”, references the constellations (with intriguing animal names), The Unicorn Tapestries, my meditations on todays contemporary use of the word “unicorn”, plus  the  integration of a top level emoji domain name which allows for further exploration; statistics and tracking, an animated .gif that will hypnotize you – JK.

The Hunt of the Unicorn Cont’d

is the short title. 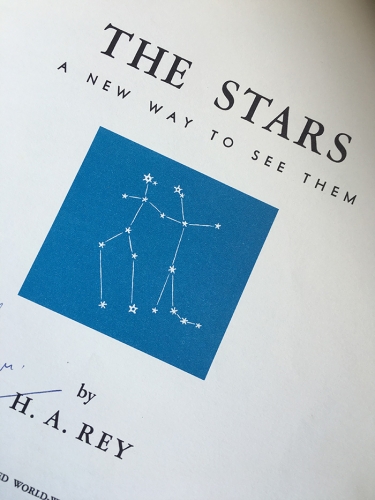 My partner brought a book home. It sat on our coffee table for a few days, before I became intrigued. It had all the markers of having been a well loved book, used often, with a fold out chart that was splitting into four piece from wear. It is called The Stars, by H.A. Rey, Houghton Mifflin Company, Boston, 6th printing, 1962.

The introduction speaks about how the space age is upon us. “Rockets are leaving tour globe at speeds unheard of only a few years ago, to orbit earth, moon, and sun. Any day now many may visit the moon, or may have done so as you read this. We talk about reaching Venus and Mars, and words like “space travel” and satellite” are picked up by children in the nursery.”  The author asks, “And how has this all affected the age-old pleasure of watching the starry sky? Has it made stargazing obsolete?” 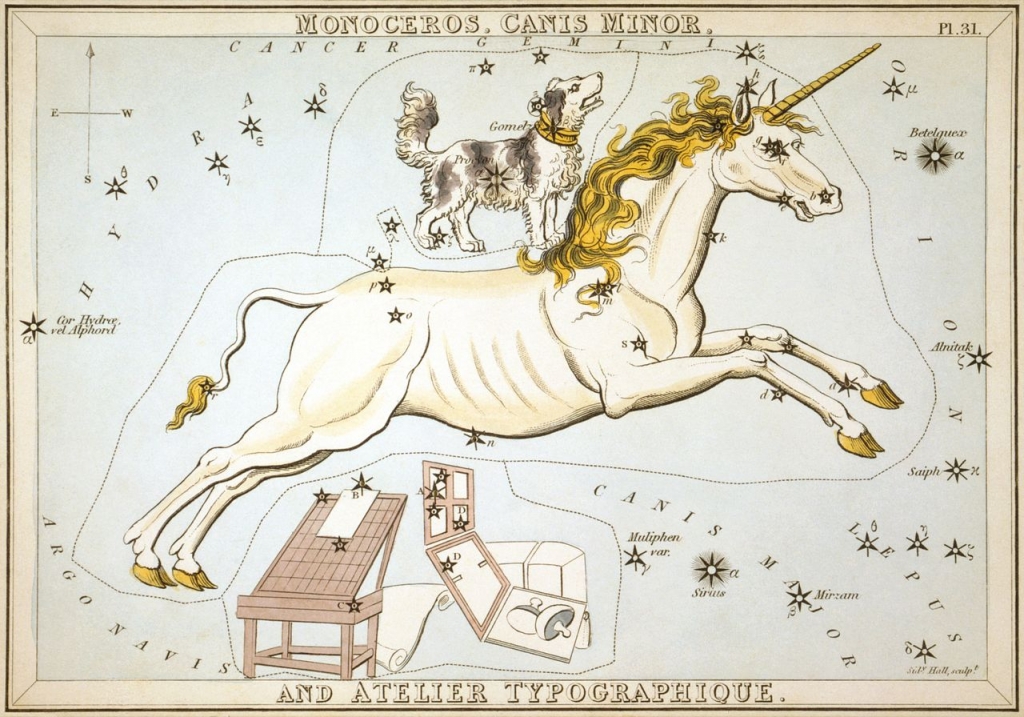 The constellation Monoceros, from Urania’s Mirror, a set of star charts from 1825. Includes Canis Minor and the obsolete constellation Atelier Typographique

The answer to this question in the year 2016 is stargazing is not obsolete. We all gaze at the stars when we close the drapes at night, go on holiday away from bright city lights, or take a quiet moment to look at the sky and ponder our past, present and future. We wonder. The sky is still filled with many unanswered mysteries.

The Stars was written for people who want to know just enough about the stars to be able to go out at nights and find major constellations, for the mere pleasure of it. “And should you venture into outer space, anywhere in the solar system, where no earthly landmark exists, the constellations would be your only guideposts…”

The constellations have such intriguing names it furthers – Lion, Whale, Unicorn, and Raven, but usually only Latin and Greek names are used like Cygnus, Monoceros, or Corvus. Instead of showing elaborate allegorical figures or geometrical shapes this book set out to show the constellations in a new, graphic way. For example, it shows the group of stars known as the Great Bear, in the shape of a Bear, and so on. In the meantime, I ordered yet another Archie McPhee mask to add to my ever growing collecting. This time I procured the Archie McPhee Unicorn Mask (above photo).

Concurrent to the ordering of the mask, I had a conversation with Veronike Irvine (PhD Candidate in Computer Science at the University of Victoria). She is developing a Mathematical Model for Bobbin Lace (tessellate.com), and how we apply new patterns to an original bookmark design and propose future areas for exploration). During our conversation about geometry, life, and unicorn, she mentioned that her sister was doing research on the Unicorn Tapestries, and asked if I knew there was a squirrel midway down the left edge of “The Unicorn is Killed.”  “No, I did not,” I replied,” but this was surely a sign.” 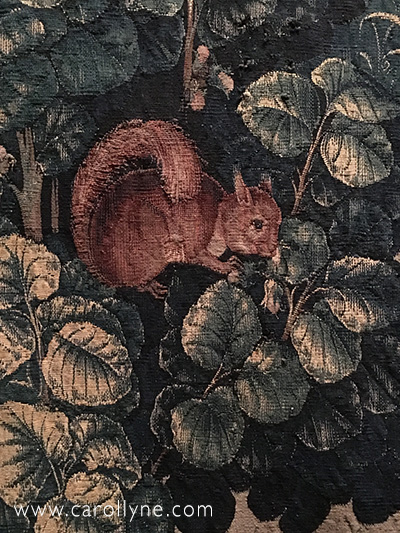 Squirrel in a Hazelnut Tree. Details from the Unicorn is Killed and brought to the Castle, the sixth tapestry of the series, The Hunt of the Unicorn. Probably 1500’s. The Met, Cloisters Collection, Gift of John D. Rockefeller, Jr., 1937

Here is a squirrel (above photo) in the tapestries shown toward the end of this video https://www.youtube.com/watch?v=dzthzlLzAzg.

This started my investigation into the Tapestries, and reading the variety of postulations about the symbolism featured within the woven fine wool and silk threads.

During my investigation, I decided to incorporate “the hunt” with horses and hounds in the painting. I initially wanted to paint the piece as a tapestry itself, or with a piece of tapestry clothing. So I went on a “hunt” at Ebay in search of the perfect piece. I came across this SM sized tapestry vest made by American Design. It was sold as a vintage equestrian horse bow hunting dogs tapestry vest. Perfect. I paid $30.49 USD. You can see how close the colours are to the Unicorn Tapestries. Although matching the painting with the Unicorn Tapestries (generally speaking) was not how it turned out in the end. 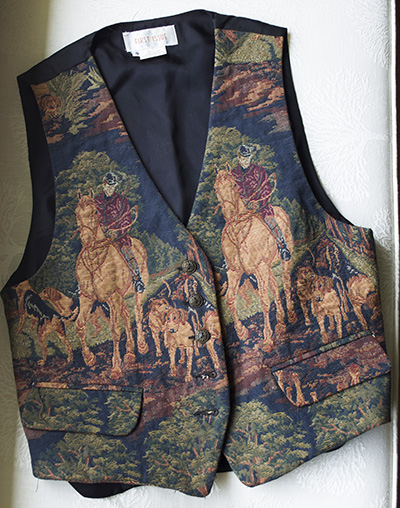 Oh, and did I mention this is the first time I’ve used a mannequin? In the past, I’ve been lucky enough to get models to volunteer for me. I call them VolunSquirrels. But this time I needed to play with my lighting, and try out a variety of scenes. I really tried out a lot of ideas on this one, over a couple of weeks. This is the upside to using a mannequin; I spent hours, and weeks, fiddling around. The downside to using a mannequin, is that the hands can be manipulated only to the left and right. The fingers don’t move, and why, why, why is this mannequin so darn heavy, and TALL. I had to keep her torso detached from her legs, just so I could carry her around. There is also an intimacy that can develop between an artist and her mannequin. In order to reposition my lady mannequin, I had to lift her up from under her armpits. This then placed my head and her head side by side. Over, and over again. In any case, she did a great job, and wore that unicorn mask like a pro. Like a human! 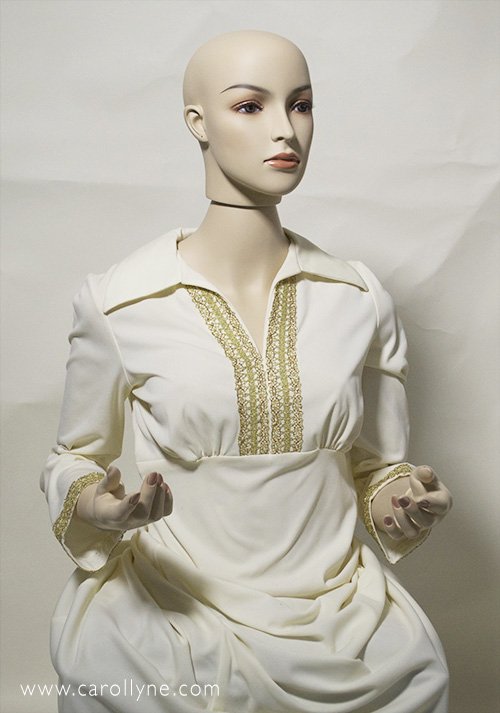 A recap on the unicorn. The unicorn is a legendary creature that has been described since antiquity as a beast with a large, pointed, spiraling horn projecting from its forehead. The unicorn was depicted in ancient seals of the Indus Valley Civilization and was mentioned by the ancient Greeks in accounts of natural history by various writers, including Ctesias, Strabo, Pliny the Younger, and Aelian. The Bible also describes an animal, the re’em, which some translations have erroneously rendered with the word unicorn.

In European folklore, the unicorn is often depicted as a white horse-like or goat-like animal with a long horn and cloven hooves (sometimes a goat’s beard). In the Middle Ages and Renaissance, it was commonly described as an extremely wild woodland creature, a symbol of purity and grace, which could only be captured by a virgin. In the encyclopedias its horn was said to have the power to render poisoned water potable and to heal sickness. In medieval and Renaissance times, the tusk of the narwhal was sometimes sold as unicorn horn.

As mentioned above, I was inspired by the Unicorn Tapestries for this painting, and was lucky enough to gaze upon them this week (May 27, 2016), in person. While my painting was already finished by then, it was still great to see them up close. They are located at The Cloisters, which houses part of the Metropolitan Museum’s splendid collection from medieval Europe.

The seven individual hangings known as “The Unicorn Tapestries,” are among the most beautiful and complex works of art from the late Middle Ages that survive. Luxuriously woven in fine wool and silk with silver and gilded threads, the tapestries vividly depict scenes associated with a hunt for the elusive, magical unicorn. 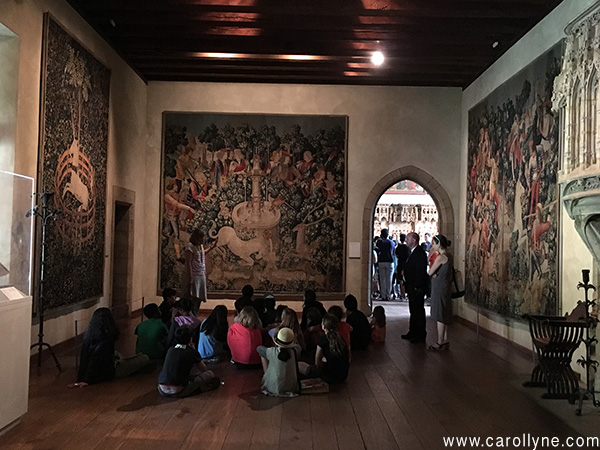 Little is known about their early history, though the seven hangings are thought to have been designed in Paris and woven in Brussels (then part of the Netherlands) between 1495–1505, and might have originally come from several sets.

Traditionally known as The Hunt of the Unicorn, these tapestries were woven in wool, metallic threads, and silk, and include the depiction of 101 species of plants, of which over 85 have been identified. The vibrant colors still evident today were produced with three dye plants: weld (yellow), madder (red), and woad (blue). 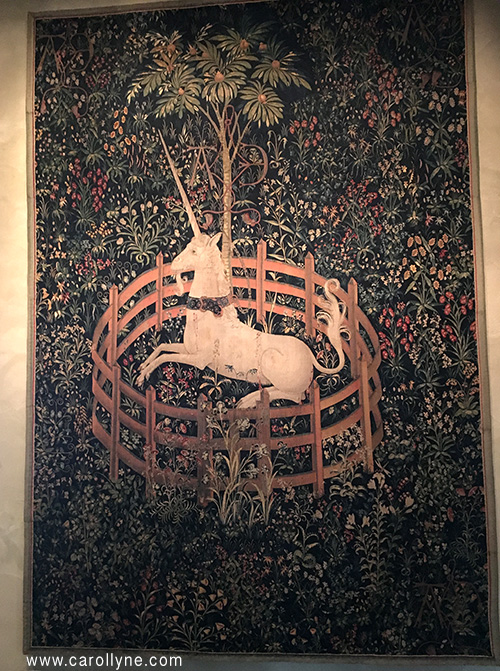 The earliest document listing the seven tapestries is a 1680 inventory that details the possessions in the Paris residence of Francois VI de La Rochefoucauld. The tapestries were subsequently moved to the family’s chateau in Verteuil, from which they were looted during the French Revolution. It was not until the 1850s that the tapestries were returned to the family. Descriptions of the tapestries since then mention only six large hangings; the seventh hanging, much destroyed during its disappearance, was reduced to two small fragments. 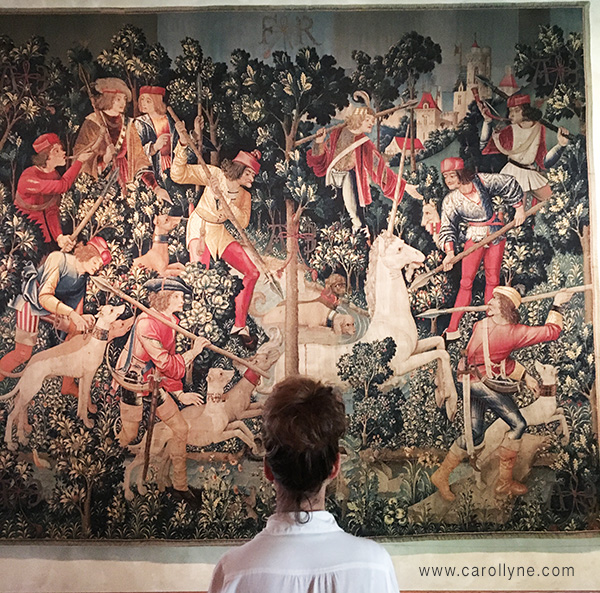 The Unicorn is Attacked

In 1922 the six large tapestries were sent for exhibition in New York where they were seen and purchased by John D. Rockefeller, Jr. They remained in his apartment until 1937, when Mr. Rockefeller presented them to The Cloisters. The two fragments were purchased separately, from Count Gabriel de La Rochefoucauld of Paris, in time to join the other six hangings for the opening of The Cloisters in 1938.

Today, the word unicorn is still used to describe anything that is highly valuable, or is of having mystical properties. For example, the word unicorn is used to describe successful start-up companies valued at over $1 billion, such as Uber or Airbnb.  Canadian tech unicorns, such as Hootsuite, are known as narwhals. There are also Cybercrime unicorns – hackers who are building empires that rival most of these sophisticated high value start ups.

The original premise for this piece included a web developers component (my former career as co-owner of web application company), and continue the connection between my current and former life. I painted Geisha Girl Squirrel  and QR Code back in 2011 as a way to track traffic on the painting over many years.  This could have been done better by creating it’s own page for statistics and tracking. This time, I went from thinking about the word Unicorn, to thinking about Unicodes which developed into creating an encoded character into a uniquely trackable URL.

I registered the top level emoji domain name and painted it into the Unicorn painting for tracking. The domain name has a fully enabled tracking system for all countries, languages, pages, and number of visitors. I had help to animate the  .gif (Graham Nott), and I’ll be adding to this page over time. My goal is to have a living art document that connected both the old world of oil painting to the new world of technology, and update it as inspired over time. This will require the continual renewal of the domain name, which may or may not be limited by unknown factors, such as service being kept available by the domain registrar. Currently the web page features a really cool animated .gif that will hypnotize you. Just kidding. 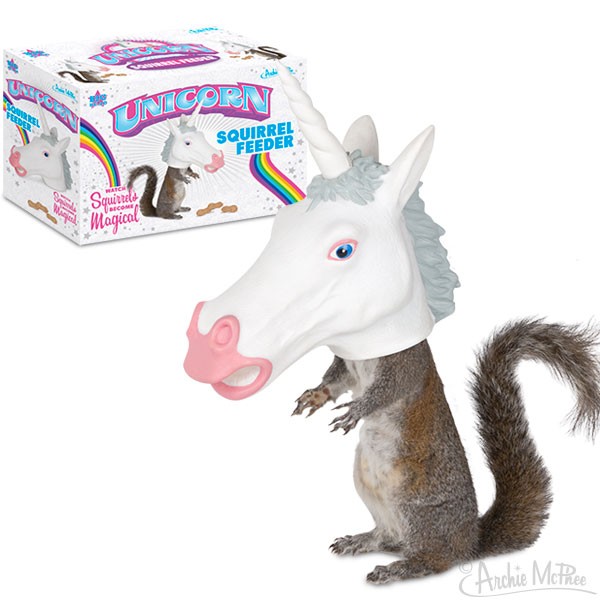 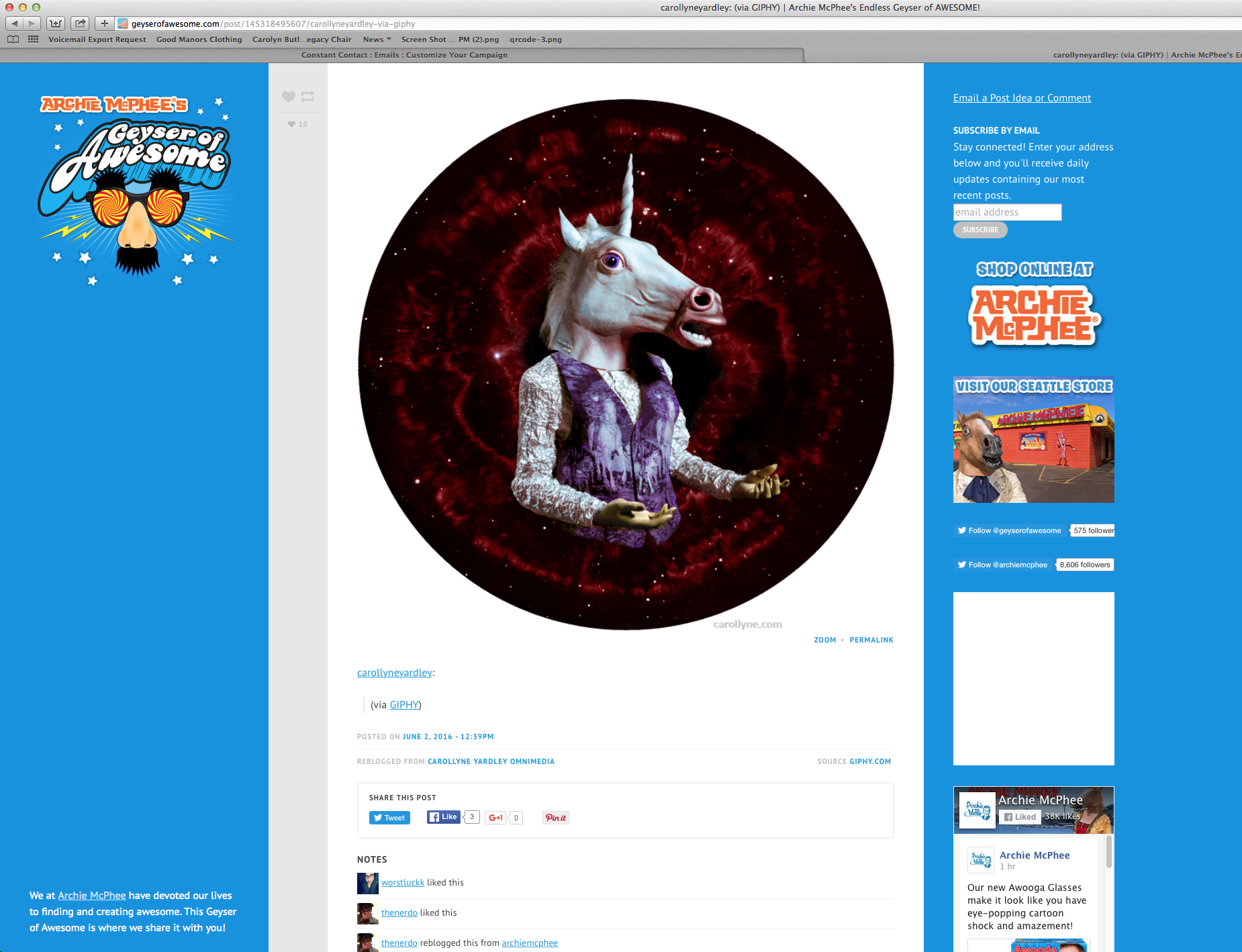