I have to admit, it was hard to suppress the squeals that erupted when I saw another squirrel made the cover of Focus Magazine, Feb 2013 issue.

Accompanying the cover is a wonderful article by Aaren Madden describing the squirrels and their depth, with a lovely photo by Tony Bounsall.

The cover painting will be on show and sale at the Romancing the Squirrel show at the Apartment Gallery, February 22 – April 01, 2013. 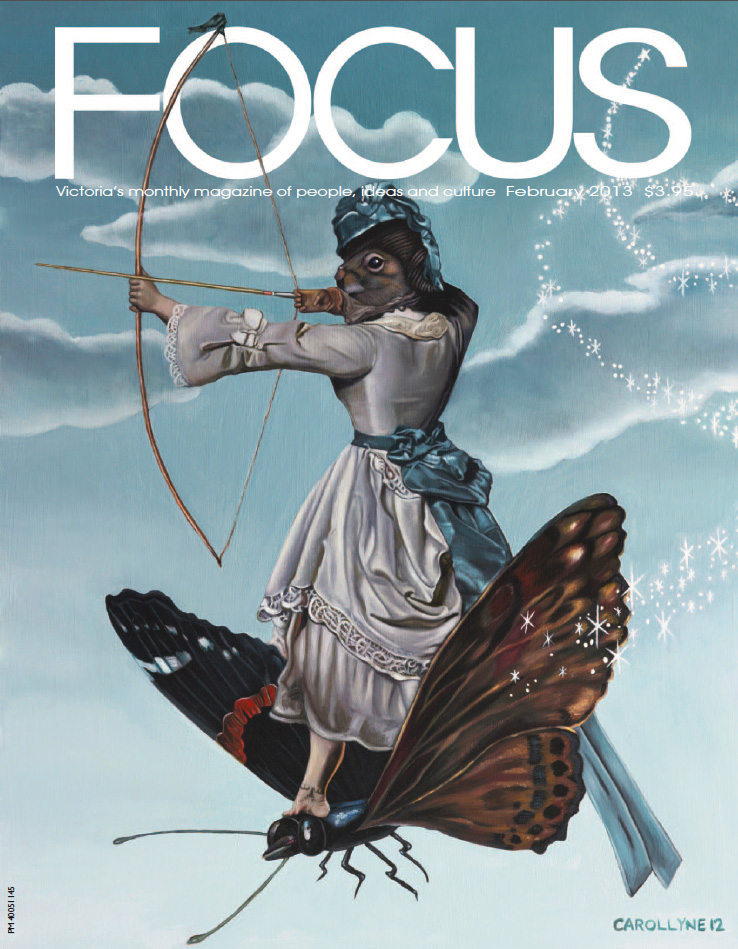 The unbearable lightness of squirrels

Even while they amuse, Carollyne Yardley’s paintings ask the larger questions.

Consider the squirrel. Its ubiquity is, for most of us, inversely proportional to the amount of thought we devote to

these creatures that share our urban and rural spaces. Unless, say, they are raiding your bird- feeder or digging up your daffodil bulbs, they live out constant but seldom-noticed dramas of survival under our noses every day.

Which is one of the reasons Victoria artist Carollyne Yardley finds them so fascinating. It began when she and her husband found an injured squirrel in the backyard of their Fairfield home. (Depending on whether any wildlife officials are reading this, they may or may not have nursed it back to health). From her living room windows, she has seen squirrels carry their babies across the electrical wires. She watches their death-defying antics, battles and breaks to eat nuts. “Whatever you want to say about them being destructive to the envi- ronment, they are tough,” she says. Be they native or invasive, they survive. “And yet they really are a mystery to many people.”

Just as people can be to one another—a notion that hit home for Yardley during a major career change. For 14 years she was a founding partner in a software application and web development business with a staff of five. She then became a professional artist, working mainly in solitude, exploring her own ideas and techniques while building a business. “Some people told me they didn’t know I was artistic. I thought that was a huge tragedy. I was amazed people didn’t see [website] graphics and design as artistic.”

The squirrel became a muse, appearing at first as a secondary presence in paintings that riffed on neoclassical works by masters like Ingres and Raphael, then as subjects in their own right in intricate portraits of elaborately dressed characters. As much as these paint- ings are meant to elicit a laugh, they also suggest, says Yardley, “a little bit about the human condi- tion.” She considers the squirrel faces “a metaphor for the secrets we keep.”

Combining her quirky aesthetic with studies in art history and psychology, Yardley’s work traverses the whimsical, the absurd (“a word I use often,” she notes), the conceptual and the allegorical. “There are lots of little stories being told in each of the paintings,” she says. “Space Hat Squirrel” alludes to the alienation anyone can sometimes feel. A painting called “Cupid and Psyche” (see cover) shows a woman in Victorian dress, standing barefoot on a butterfly, about to release an arrow from its bow. “[It] is about finding your passion and being really focused and aiming for what it is that you want to do, and flying there with determination,” Yardley explains. “And, you know, wearing a bustled Victorian gown while you do it!” she adds with a captivating laugh.

These visual delights give levity to the searching questions. She once wrote a list of her favourite things in her Moleskine note- book: “Wonder Woman. Old TV shows. Vintage clothing. Sparkle. Glitter. I put that together in paintings because that’s really the authentic person,” she smiles.

Growing up in the 1970s, Yardley spent a great deal of time with her grandparents, so she was also immersed in the ’50s, she says. Lawrence Welk and Lucille Ball feed as much of her aesthetic as Gilligan’s Island and those velvet paintings of mooning, big-eyed girls in harlequin costumes that graced every girl’s bedroom walls for a certain period in time.

In her work, these pop culture references abound and bump up against classic iconog- raphy, symbolism and visual tropes. The ensuing non-sequiturs create delight by being simul- taneously familiar, absurd, kitschy, challenging and entertaining.

“The Avengers” is a time-collapsing portrait of a superhero of Yardley’s creation: the squirrel subject wears a 1980s-era necklace with the Avengers logo (also the logo for Yardley’s current and former business ventures), a gown of apparently late Victorian vintage, and a bobbed 1920s hairdo adorned with the wings of Mercury. “So she serves her justice swiftly,”

Yardley quips, eyes gleaming, hair piled elegantly as befits one so inspired by eras gone by.

As much as Yardley imbues her subjects with meaning and back-story, seeing how others interpret them is equally important to her. “It’s about animated personalities hiding behind the squirrel mask and delivering to you, in a costumed format, what you think they might be like. And then it’s up to you to be able to think what kind of life they live. People have built the story,” she says, because the enigmatic squirrel face opens up endless possible truths.

By thus engaging the imagination and presenting the visual cues she does, Yardley’s work can be categorized as pop surrealism. A defining aspect of the genre is to combine “technical craftsmanship with an imaginative, pop sensibility,” she explains. This is certainly true of her work; she has studied classical painting and drawing at the Ryder Studio in Santa Fe. While painting from life is an essen- tial tenet there, Yardley finds more satisfaction in a photograph’s ability to help her quickly follow through on an idea. Besides, squirrels don’t sit still—though that fact has not hindered her deft rendering of fur.

In the mere four years since she has been painting essentially full-time, her technique has changed dramatically. Yardley shifted from acrylic on canvas to oil on board. It imbues some of her later works with a certain historical authority, adding another layer of resonance.

Yardley’s most recent painting marks a depar- ture from the portrait, but remains linked to that larger narrative. “Romancing the Squirrel” (behind Yardley in photograph, far left) shows a young girl reaching up in adulation to a giant topiary squirrel set in a manicured garden maze. The title references the ’80s film, Romancing the Stone, about an adventurous treasure hunt. The visual tension inherent in taming a wild creature within the highly manip- ulated branches of a topiary speaks to human interactions with nature, complicated by the Victorian symbolism of the manicured garden as a reflection of virtue. “The girl is bringing the human character into the painting,” Yardley explains. “The idea has been to keep the squirrel somewhere in the paintings so I can tie that story together, but they may evolve so I can bring more elements, more characters into the paintings. This is the beginning of that tran- sition period,” she says.

The painting will be featured in Yardley’s exhibition at the apARTment Gallery begin- ning on February 22 , also called Romancing the Squirrel. Gallery director Ellen Manning calls Yardley “a very exciting artist,” saying of her work, “it is not only our capacity to see which is stimulated—it is also our intellect.” For Manning, as Yardley intends, these crea- tures inspire contemplation: “Perhaps each of the squirrels present an aspect of Carollyne she is otherwise unwilling to reveal. Or it could be that these creatures are meant to inspire us to embrace the original, sarcastic, misfit and unexpected aspects of our personalities which we all keep bottled inside,” she posits.

Along with these considerations, “I can tell you that there will be ample secrets to unveil,” Manning promises of the exhibition. Certainly viewers will be amused, challenged, and inspired to hold a different lens to the everyday. It will be an opportunity to, metaphorically, if you will, reconsider the squirrel.

See Yardley’s work at Romancing the Squirrel, February 22 (opening night) to April 1, The ApARTment Gallery, 1016 Fort St and in the group show Curiouser, at the fifty fifty arts collective, 2516 Douglas St (at Bay St), February 21 to May 17. Curiouser will include over 20 artists and craftspeople from Victoria and the BC coast.